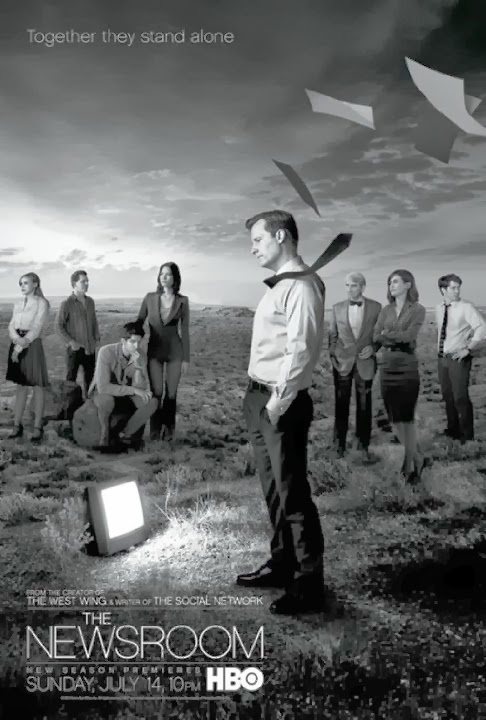 HBO has finally given its verdict on The Newsroom, Aaron Sorkin's drama about the goings-on behind the scenes at a cable news network. Sorkin & Co. -- which includes lead actor Jeff Daniels and co-stars John Gallagher, Emily Mortimer, Olivia Munn, Dev Patel, Alison Pill and Sam Waterston -- made it through a bumpy first season and a more interesting second season that still didn't set the ratings on fire. When Season 2 closed out last September, there was talk that The Newsroom had been renewed for a third year, but it wasn't confirmed. That finale episode seemed to tie up all the ends pretty neatly, plus Sorkin's schedule was busy and complicated, and the show has a pretty large ensemble cast of in-demand actors. So negotiations continued...

Well, now the official announcement has been made. Yes, there will be a Season 3. But this will be its last go.

I had my problems with The Newsroom and how Sorkin put together his storylines, even though his cast is first-rate and I enjoy seeing actors like Daniels, Gallagher, Patel and Waterston -- and Hamish Linklater and Chris Messina, who also appeared to good effect as the episodes wore on -- put together characters through the vehicle of Sorkin's trademark snappy dialogue and erudite speeches. Note that those are all males. That's the biggest problem for me with Sorkin's work. His female characters are generally emotional disaster zones who just don't make sense, even when played by otherwise good actresses like Mortimer and Pill. And Hope Davis and Kelen Coleman. Jane Fonda, Mamie Gummer and Constance Zimmer fared better in the second season, but really had very little to do when all was said and done. Plus Sorkin kept centering the attention on Mortimer's erratic MacKenzie McHale (even the name is ridiculous) and Pill's listless, wounded Maggie Jordan in ways that simply didn't work and dragged the proceedings back down to the soggy swamp of crazy ladies and the men who inexplicably yearn for them. Jeff Daniels and his character Will McAvoy had more spark with Hope Davis's ethically challenged reporter than with klutzy, up-and-down Mac, and neither John Gallagher or Thomas Sadoski showed even a flicker of chemistry with Alison Pill, even though they came to life just fine with Mamie Gummer and Olivia Munn respectively. In fact, Sadoski's snaky Don Keefer became one of my favorite characters when paired with Munn's Sloan Sabbith, unexpectedly redeeming both of them.

So, yes, I had my issues with the show. Given how much the last episode felt like a series finale, it will still be interesting to see where we go next, however. Will Sorkin pull another Operation Genoa (inspired by the real Tailhook fiasco at CNN) as a framing device for the whole season? I think he will. Where will he pick up the various romances, since nobody got fired except the evil Jerry Dantana, Will and Mac got engaged at the 11th hour (just so she can become MacKenzie McHale McAvoy, don't you think?) to the sappy sounds of "Let My Love Open the Door," Don and Sloan got closer, and Gallagher's good-guy Jim Harper created a rapprochement between estranged roommates Maggie and Lisa without indicating he was romantically interested in either of them but instead keeping the thing he has going with the more emotionally balanced girlfriend played by Gummer.

So I'd imagine Sorkin will find some way to bust up Will and Mac temporarily, keep playing footsie with Don and Sloan, and push Jim back together with Maggie, which certainly seems like his endgame, even if I find it less than intriguing. Real stories that cropped up in the right period include the government shut-down, Manti Te'o and his fake girlfriend, Anthony Weiner, Paula Deen, Rob Ford, Duck Dynasty, Bridgegate and Chris Christie, and a whole lot of talk about the NSA and its eavesdropping on everybody and everything. I can't imagine Aaron Sorkin could resist that last one.

We will see, when The Newsroom returns to HBO sometime this fall.
Posted by JulieK at 3:39 PM