New Route Theatre and director Don Shandrow have decided to bring their production of Katori Hall's The Mountaintop back one more time for area audiences.The image you see here is from their previous production in 2013, so pay no attention to those dates! The new dates are January 31, and February 1-9. But the venue is the same -- the McLean County YWCA on Hershey in Bloomington -- and you can still email new.route.theatre@gmail.com or call 309-827-7330 for reservations. Tickets are $10.

Hall's play imagines Dr. Martin Luther King, Jr. on the last night of his life at the Lorraine Motel in Memphis, Tennessee. He is visited by a hotel maid who brings coffee and stays for conversation that ranges from the mundane to the spiritual. The Mountaintop has become a spiritual phenomenon for playgoers, too, as they've flocked to see it in London, Broadway and regional productions. 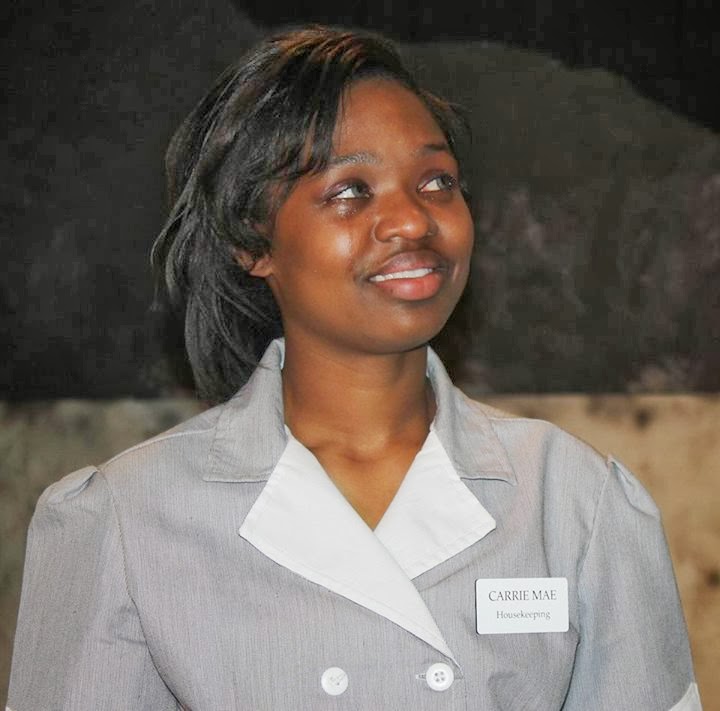 New Route last performed The Mountaintop in February 2013, featuring Gregory D. Hick as Dr. King and Fania Bourn as Camae, the maid who is not necessarily what she appears to be. They will both be back for this 2014 version, and that's Bourn at left in character.

The Mountaintop opens in New Route's YWCA space on January 31, 2014. For more information on this production, you can visit the event's Facebook page here.
Posted by JulieK at 12:55 PM