BULLETS OVER BROADWAY the Musical Gears Up for March Opening 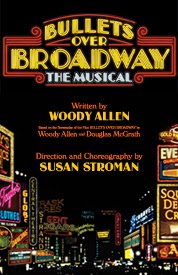 The show doesn't open in previews till March 11, but the box office has been open since November for Bullets Over Broadway, the Broadway musical version of Woody Allen's 1994 comedy film about a writer trying to get his show up and running on the Great White Way of 1929 while sidestepping interference from a mobster with money and the bimbo girlfriend he wants to set up in a starring role.

Allen and Douglas McGrath wrote the script for the movie, which brings to mind backstage musicals like 42nd Street and backstage plays like Broadway. The first has a producer and some plucky kids coping with all sorts of strife and complications trying to put on a show, while the latter mixes in the gangster element. Allen has adapted the screenplay from the film to create the book of this new Bullets, and, yes, it will be a musical, although the score will be taken from period songs arranged and adapted by Glen Kelly. Five-time Tony Award winner Susan Stroman is directing and choreographing, with three-time Tony winner Santo Loquasto as scenic designer and six-time Tony winner William Ivey Long as costume designer. Loquasto also did production direction for the movie.

But I'm sure you're wondering who's going to play whom. So here's a handy chart of the characters and actors:

David Shayne, the writer trying to keep together the pieces of his play.
Film: John Cusack
Stage: Zach Braff of Scrubs fame.

Helen Sinclair, the boozy drama queen of a leading lady who keeps saying "Don't speak" and trying to seduce David.
Film: Dianne Wiest
Stage: Marin Mazzie
Note: The role won Wiest an Oscar in the Supporting Actress category along with a slew of other awards.

Cheech, a hitman and bodyguard who starts to play an important role in the creative side of the show.
Film: Chazz Palminteri
Stage: Nick Cordero
Note: Palminteri was also nominated for an Oscar.


Julian Marx, the producer trying to keep the show afloat.
Film: Jack Warden
Stage: Lenny Wolpe
Note: The name Julian Marx is a callback to Julian Marsh, the director on the verge of a heart attack in 42nd Street. And maybe to the Marx Brothers.

Warner Purcell, the leading man in David's play who eats too much and has a bad habit of putting the moves on Olive.
Film: Jim Broadbent
Stage: Brooks Ashmanskas

Eden Brent, the chirpy, perky actress who is never dressed without a smile. And a chihuahua.
Film: Tracy Ullman
Stage: Karen Ziemba
Note: I saw Ziemba in Crazy For You three times. Susan Stroman also choreographed that take-off on a classic Gershwin musical from 1930. And she won a Tony for it.

The characters and inside Broadway plot sound perfect for a musical, and that cast is first-rate. I have some concerns about Braff -- never heard him sing -- but you can see him and everybody else but Ziemba in a Playbill video done of the cast's photo shoot back at the beginning of January. That's Ashmanskas reaching for a pastry, Mazzie tipping back the flask and Yorke looking snazzy in red.

You'll find the complete cast for this new Bullets along with info on the plot and how to buy tickets at the official Bullets Over Broadway the Musical website. Previews begin March 11 at the St. James Theatre, with opening night set for April 10. If you can't time-travel back to the real Broadway in 1929, Bullets Over Broadway looks like a nifty substitute.
Posted by JulieK at 2:11 PM