Moliere's SCHOOL FOR WIVES Up Next at ISU 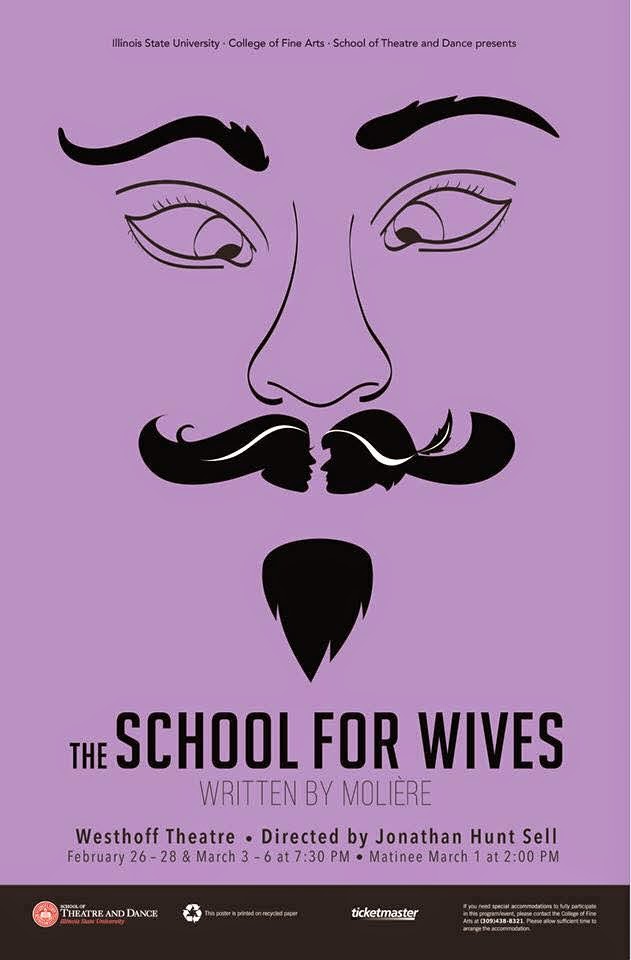 When looking for classics, college theatre programs often land on Moliere. Moliere (or Jean-Baptiste Poquelin, which is his real name) isn't as familiar as Shakespeare, as talky as Shaw or as sad as Chekhov, plus his critiques of privilege and pomposity are still funny and still as much on target as they were in the 17th century.

Next week, Illinois State University's Department of Theatre and Dance returns to Moliere for the first time since 2008, when Tartuffe was on the bill, bringing The School for Wives to Westhoff Theatre. School for Wives is a comedy, of course, with humor that punctures the arrogance of a man of position who is so afraid of being cheated on that he brings up his beautiful young ward in a nunnery with the idea of marrying her himself before she can meet any other men.

MFA directing candidate Jonathan Hunt Sell directs a cast that includes Dario Carrion as Arnolphe, the middle-aged man trying to maneuver an innocent young woman into marriage; Natalie Kozelka as Agnes, the woman in question; and Kaitlyn Wehr as Horace, the young man she meets and falls in love with when Arnolphe isn't looking.

You will notice that Sell has gender-bent Horace as a comment on the sexual politics at work in the play. The other roles are played straight, however, with Nicholas Spindler and Eliza Palumbo as Arnolphe's servants, Bryson Thomas as a friend who tries to steer his old pal Arnolphe away from the errors he's making, and Aaron Thomas and Sam Willis as a pair of deux ex machina fathers who arrive on the scene just in time.

The School for Wives opens February 26 at 7:30 pm in Westhoff Theatre, with additional evening performances on the 27th and 28th as well as March 3, 4, 5 and 6. There is one matinee scheduled for March 1 at 2 pm.

For more information on ISU's entire season, visit this page on their website. Click here for ticket information.
Posted by JulieK at 2:14 PM