Will You Be Taken By HOSTAGE at New Route? 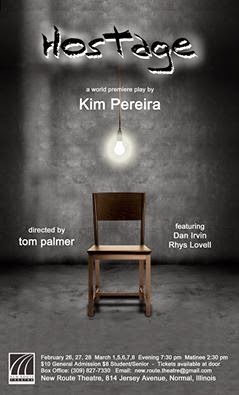 This week, New Route Theatre opens its 2015 season with the world premiere of Hostage, a play by Illinois State University professor Kim Pereira.

New Route describes the play as an "exciting and timely two-person play... as fresh and controversial as today's headlines." For this production, the two people in that tagline are played by Dan Irvin and Rhys Lovell, well-known local actors.

Hostage, a semi-finalist at the Eugene O'Neill Center National Playwrights Conference, is set in the complex, dangerous world of the Middle East, where ISIS, West Bank conflicts and Arab-American relations continue to stir up tension and instability. The central story of Hostage focuses on an American journalist named David, played by Lovell, and an Arab-American played by Irvin. Irvin's Karim was born in the United States but now lives the Middle East.

What happens next when they meet up?  "Unexpected turns force both men to confront difficult truths about themselves and the strange roles they will play in each other's lives."

Hostage is directed by Tom Palmer, a guest director who came from Atlanta, Georgia for the assignment. Performances begin on February 26 at 7:30 pm and continue on the 27th and 18th as well as March 1, 5, 6, 7 and 8. Sunday matinees start at 2:30 pm.

All performances will take place in New Route's new space at 814 Jersey Avenue in Normal. Tickets are priced at $10 for general admission and $8 for students and seniors. For more information, you can visit the event's Facebook page. For reservations, call 309-827-7330 or e-mail new.route.theatre@gmail.com You may also purchase tickets at the door.
Posted by JulieK at 12:58 PM