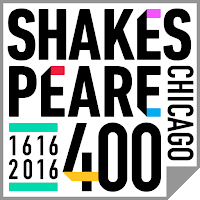 Last weekend marked the 400th anniversary of the death of William Shakespeare. This was celebrated worldwide, but especially in England, where all kinds of events have been happening, like the Royal Shakespeare Company's star-studded Shakespeare Live!, which is supposed to be shared in cinemas worldwide in May. In the United States, Chicago has also made a splash with its ongoing mix of art, theater, video and food.

I was moved to celebrate in my own way by composing a faux-Gorey poem (like the "Gashlycrumb Tinies" and their rhyming couplets) covering some of the deaths in Shakespeare. This isn't the sort of thing I usually do -- I do not believe I have the rhyming gene and I'm terrible in general when it comes to poetry -- so when the idea struck me, I asked my husband to help. He does have the rhyming gene and he's much better with rhythm and meter. I shared the ones I knew I wanted to start with, the famous, funny ones like Antigonus, who was pursued by a bear, and Tamora's sons, who were baked in a pie by Titus Andronicus. My husband said immediately that he felt certain someone else (or several someone elses) had already done up Shakespeare's deaths a la Edward Gorey and I said, oh well, I'm having fun, I don't want to see what other people have done and get their choices in my head, so I'm just going to do it, anyway. He also noted that I was going to have trouble when I got to X, Y and Z, and I said, well, I have Y, anyway, what with Yorick and the skull plucked from a grave in Hamlet, and surely Shakespeare referred to somebody like Zeus at some point. Maybe I'd even get lucky and find a Xanthus or Xenia.

So off I set, armed with my copy of "Who's Who in Shakespeare." I traversed X just fine, what with Petruchio invoking the name of Xanthippe in The Taming of the Shrew, but there was no Zeus, only Zenelophon. And when I googled Zenelophon to see who she was, I mistakenly typed "Zenepholon" instead, and one Twitter post popped up, because it also spelled it wrong. It was part of a conversation from someone named Robin Johnson who'd done a Gorey-esque poem about the deaths in Shakespeare! In April 2015! And so my husband was right again.

Since I was already at Z, I didn't think I would be unduly influenced, so I read Robin Johnson's poem, which doesn't have that much overlap in terms of who he chose or how he dispatched them, but is better than mine in several ways -- it scans much better, plus he was much more clever with Hamlet and some others -- but I do prefer my Xanthippe and Zenelophon. He also seems to have concentrated on more major characters, so he has Anthony instead of Antigonus, for example. But Antigonus and his bear were one of the reasons I undertook it, so I wasn't at all sorry to have kept them. When it got to Z, Johnson's poem went with "in 38 plays, no one's name starts with Z," with his British Z pronounced "zed," which rhymes with "York, whom the queen orders dead." That's all nifty, but I was determined to find a way to work with Yorick and Zenelophon.

In the end, here's what I did:

A is for Antigonus, pursued by a bear
B is for Banquo, not really there

C is for Cleopatra, dispatched by an asp
D is for Desdemona, choked in jealousy's grasp

E is for Emilia, a victim of rage
F is for Falstaff, dying off-stage

G is for George, the one drowned in a butt
H is for Hamlet, slashed by Laertes' cut

I is for Iras, loyally bit
J is for Julius, a political hit

K is for Katherine, lonely and sad
L is for Lavinia, killed by her dad

M is for Macbeth, slain by one ripped from the womb
N is for Ninus, who had a big tomb

O is for Ophelia, submerged in a brook
P is for Polonius, for a rat mistook

Q is for Quintus, beheaded, of course
R is for Richard, who needed a horse

S is for Suffolk, banished to die
T is for Tamora's sons, baked in a pie

U is for Uther, carried on a cot
V is for Vaughn, executed in a plot

W is for Wolsey, to his king untrue
X is for Xanthippe, a scold and a shrew

Y is for Yorick, his skull polished clean
Z is for Zenelophon, from beggar to queen

And that's what I did on the 400th anniversary of the death of Shakespeare. I may not have put this up on April 23rd, but I did write it on the 23rd. My husband didn't want to comment on my meter (he is too kind) but I know I am no master. I just had fun. (J is for Julie, who died via rhyme...)
Posted by JulieK at 1:40 PM