OUR COUNTRY'S GOOD Puts on a Play for Bradley University Theatre 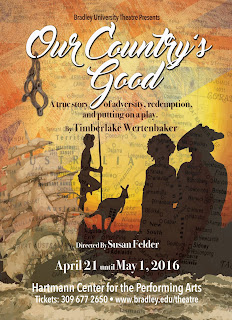 Timberlake Wertenbaker's Our Country's Good has been a popular choice for theatres ever since Wertenbaker wrote the play in 1988. The script may be catnip for directors and actors because it's about theater, about the power and danger of bringing drama to people at the bottom of the social ladder, but it also delves into colonialism, the long reach of the British Empire, crime and punishment, sex, class and love, and how human beings try to keep their humanity alive.

All of that is wound around the story of a group of convicts in 18th century Australia putting on a play -- George Farquhar's Restoration comedy, The Recruiting Officer -- as directed by their British overlords. The convicts, all sent to an Australian penal colony for offenses back in England, are very different people, but they're all in desperate straits, with nothing to call their own. It's how they interact with and affect the Royal Marines who are in charge of them that forms the drama in Wertenbaker's play, with one indigenous Australian who keeps a watchful eye on the proceedings.

Click on the photo to see it larger size.

Performances of Our Country's Good continue at Bradley through May 1 at 8 pm on Thursday, Friday and Saturday and 2:30 pm on Sunday. For ticket information, call 309-677-2650, visit www.bradley.edu/theatre or check out the production's Facebook page.
Posted by JulieK at 1:04 PM