Checking Into Laura Jacqmin's RESIDENCE at the 2016 Humana Festival 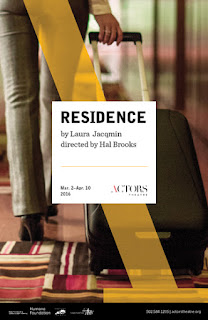 A hotel can be a weird little world of its own. You can sleep, eat and entertain yourself there, and communicate with the outside world without ever leaving your room. And for the employees...

I speak from experience when I say that a hotel can become your world, too. A long time ago, I was a front desk clerk (and before that, switchboard operator, pool attendant, room service waiter and hotel babysitter) at a large resort near my parents' house. Every summer, I would dream of a job elsewhere -- maybe at the mall where I could get a discount on clothes -- but I always ended up back at the hotel, picking up a uniform and getting to work. Let's just say I had a love/hate relationship with that hotel.

The characters in Laura Jacqmin's Residence , the first play I saw at the 40th annual Humana Festival of New American Plays at Actors Theatre of Louisville, have a similar outlook. There's Maggie, checking in for four weeks while she tries desperately to make a sale with medical equipment, Bobby, a charming man on staff who appears to fill in wherever he's needed -- bellman, chauffeur, whatever -- and Theresa, the bright-eyed management trainee who dreams of earning a "manager" badge. All three have issues that interfere with their jobs, issues from the outside world that push them closer toward a precipice of no job, no prospects, no hope. Who will fall over the edge first?

During Residence, we see the connections they make together, as each tries to maintain some kind of stability. Theresa is determined to show every guest (and in this case, that means Maggie) a "five-star experience," while Bobby wants to get high and flirt with Theresa. As for Maggie... We see her secrets unwind over FaceTime conversations with her husband and baby back in Wisconsin.

Jacqmin writes smart, sharp dialogue that pulls us in and makes us hope for the best for these three, even if Maggie's job selling ultrasound equipment, her back story and Bobby's outside life dovetail a little too neatly. There are mixed messages in the script -- Is it about friendship and community in a strange place? Growing up and becoming a responsible adult with all the burdens, financial and emotional, that entails? The American way of debt, especially when it involves education and healthcare? -- and some of the plotlines get a little lost as it moves on. Under the direction of Hal Brooks, the Humana Festival production looked so good and moved so well it disguised some of the lapses in the script, but it seems unlikely other theatres will be able to recreate Daniel Zimmerman's fantastic set that dropped a pool deck and firepit over a hotel room in Actors Theatre's black-box Bingham Theatre. Still, for me at least, the hotel environment and the real, recognizable characters made an emotional impact.

Among the cast, Alejandro Rodriguez is perfect as Bobby, the catalyst for much of what happens at the Residence hotel, and Leah Karpel gives us a Theresa who is so sweet and adorable I felt like offering to kick in to a GoFundMe for her fictional tuition bill. Danielle Slavick makes Maggie as edgy and unhappy as she needs to be, building nicely to an explosive confrontation where her acting partner is on screen instead of in person, but also telegraphing early on that there is something very wrong with this woman. Would any husband really send someone so fragile out into a hostile world for four long weeks?

The good news is that Residence made me ponder issues like that.

Residence ran from March 2 to April 10, 2016, at Actors Theatre of Louisville's 40th Humana Festival of New American Plays.
Posted by JulieK at 12:16 PM