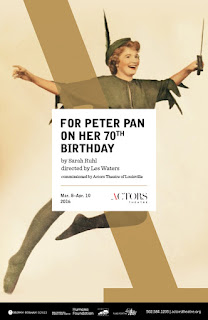 If there was a marquee event at this year's Humana Festival of New American Plays, it had to be Sarah Ruhl's For Peter Pan on Her 70th Birthday.

When Ruhl came to Louisville for the Humana Festival, her play got Actors Theatre's artistic director, Les Waters, as its director, with an A-list cast, including Kathleen Chalfant, a multiple Tony nominee herself. It doesn't get much better than that.

So how did her Peter Pan do? In performance, Ruhl's script for Peter Pan showed enough wit to keep it buoyant, a sweet affection for its characters, especially Ann, the one played by Chalfant, and just a shade of sadness. You might expect "I don't want to grow up" as a theme, given the title, and that's definitely there, but it's part of a larger issue, when growing up involves saying goodbye to the generation ahead of us.

It's become something of a running joke that critics inevitably try to find some sort of overall theme for each year's Humana Festival, although the people at Actors Theatre swear they don't pick plays to suit any one idea. This year, American Theatre's Russell M. Dembin touches on the theory that ghosts provided the Festival's throughline. While there were certainly a number of ghosts, for me, confronting mortality emerged as a more pervasive theme, especially within parent/child relationships. That's front and center in For Peter Pan on Her 70th Birthday, as Ann and her siblings gather to deal with their father's death.

When the play opens, Ann, her sister Wendy, and her brothers Jim, John and Michael sit and wait in their beloved dad's hospital room. Two of Ann's brothers are doctors, as was their father, so they're well aware he doesn't have much time. From there, the play moves to the five of them at the old kitchen table, drinking, reminiscing and arguing during Dad's wake, and then into a sort of dream sequence where each takes on a role in Peter Pan, which Ann starred in as a child.

I don't know how many 70-year-old actresses there are in the world who'd be willing to step into Peter Pan's tights and fly around the stage, but Chalfant is game, as are the younger-but-not-exactly-young Lisa Emery, who plays Wendy, and Scott Jaeck (John), David Chandler (Jim) and Keith Reddin (Michael). The roles they play in Ann's life are reflected in their Peter Pan roles, as well, although the political talking points they hurl at each other and how that sets up Captain Hook in the play-within-a-play come off somewhat forced as a dramatic device.

What was best about the Humana Festival For Peter Pan was, in a word, Chalfant. She had the audience in the palm of her hand from her curtain speech to her flying game, and she made Ruhl's words come alive with the elegance and expertise of her delivery. Looking at the words on the page, I found they don't seem nearly as funny as they did when Kathleen Chalfant was saying them.

Ron Crawford, who played the father they'd all come to honor, also emerged as a major presence in the play, even when he was lying motionless in a hospital bed. His contributions to the second scene -- what Ruhl calls "Movement Two: The Irish Wake" -- were especially well-received, as his timing and wry humor paid off nicely.

Chandler, Emery, Jaeck and Reddin each etched an individual portrait and together with Chalfant, they created a recognizable family dynamic, the kind where being together throws you right back up against the same buttons you've been pushing since you were kids. We don't really ever grow up, after all.

One other strength: A local marching band that came in to cover the scene change between Movements One and Two, playing "When the Saints Go Marching In." It was perfect. Here's hoping other productions will find their own marching bands if For Peter Pan on Her 70th Birthday pops up in regional theaters.
Posted by JulieK at 4:55 PM