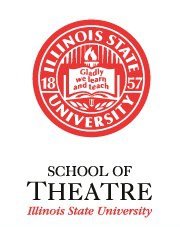 Tickets are now available for Illinois State University's 2016-17 theatre and dance season, a season full of different and intriguing choices. There's something sweet (a radio play version of It's a Wonderful Life), a major piece of existential theater history (Rosencrantz and Guildenstern Are Dead), a little U.S. history (1776), and several trips to other parts of the world, with New Zealand (Waiora), Argentina (The Walls), Egypt (The Coffee Bar), Mexico (The Heresy of Love) and a dystopic future India (Harvest) all on the map.

Four of these plays come from the 1960s with a fifth set in the 60s, although I don't know if that was intentional or just a coincidence. Still, The Walls, The Coffee Bar, Rosencrantz and Guildenstern Are Dead and 1776 are all products of that particular influential period in world theater, and Waiora is set in 1960s New Zealand.

In case you're keeping track, there are five male playwrights* to three female playwrights, and four male directors to three women, with one directing assignment still to be announced. Among the playwrights, two are American, two hail from the British isles, and four come from the rest of the world. Here's what the lineup looks like:

WAIORA by Hone Kouka (directed by Kim Pereira)
September 30–October 8, 2016, in the Center for the Performing Arts
Hone Kouka was the youngest ever writer to win New Zealand's Bruce Mason Playwriting Award (in 1992). He is of Ngati Porou, Ngati Raukawa and Ngati Kahungunu descent, and he often writes about Maori characters and issues. Waiora tells the story of a Maori family struggling to find an identity and a sense of home when they move from a rural life to a more urban one.

THE WALLS by Griselda Gambaro (directed by Bruce Burningham) and THE COFFEE BAR by Ali Salem (directed by Janet Wilson)
October 21–29, 2016, in Westhoff Theatre
These two short plays, to be performed together as one evening of theater in Westhoff Theatre, deal with political issues and how artists respond in the face of repression and fear. Argentine playwright Griselda Gambaro wrote The Walls in 1965, putting a harsh spotlight on the kidnappings, torture and executions that were part and parcel of daily life under the Argentinian police state. In Egypt, Ali Salem used humor and satire in The Coffee Bar, his 1968 play that critiques the politics of power and the effect on the powerless.

IT'S A WONDERFUL LIFE: A Live Radio Play adapted by Joe Landry (directed by Connie de Veer)
December 2–10, 2016, in the Center for the Performing Arts
It's a Wonderful Life, the 1946 Frank Capra movie about a man who meets an angel on Christmas Eve and learns his ordinary life was worth living, often shows up at the very top of Favorite Movies Ever lists. Joe Landry reimagined it as a 1940s radio play, with actors behind big standing microphones, scripts in hand, sound effects performed with wood blocks and car horns, and a big APPLAUSE sign cuing the audience.

ROSENCRANTZ AND GUILDENSTERN ARE DEAD by Tom Stoppard (directed by Paul Dennhardt)
February 17–25, 2017, in Westhoff Theatre
Tom Stoppard turned Hamlet sideways when he wrote Rosencrantz and Guildenstern Are Dead, showing what was happening with these two minor players while Hamlet was off propelling the action Shakespeare gave him. Shakespeare's leading characters do show up now and again, but the focus is really on courtiers Rosencrantz and Guildenstern, tossed about by storms they really can't see or understand.

1776, with book by Peter Stone and music and lyrics by Sherman Edwards (directed by Lori Adams)
March 3–10, 2017, in the Center for the Performing Arts
What with all the Hamilton brouhaha, 1776 -- originally on Broadway in 1969 -- is finding a new popularity. Like Hamilton, 1776 looks back at the very beginning of the United States, but it works with John Adams, Benjamin Franklin and Thomas Jefferson instead of Alexander Hamilton. We see delegates from the 13 colonies as they debate independence from England, with prickly Adams on everybody's nerves, Jefferson acting as the wordsmith for the Declaration of Independence, and Rutledge, the delegate from South Carolina, insisting on taking out any anti-slavery language.

THE HERESY OF LOVE by Helen Edmundson (directed by Robert Quinlan)
March 31–April 8, 2017, in Westhoff Theatre
British playwright Helen Edmundson is best known for adaptations of literary classics like War and Peace and The Mill on the Floss, both with the Shared Experience ensemble and for BBC radio. This time, Edmundson writes about Sor Juana Inés de la Cruz, a nun and poet in Mexico in the 17th century struggling to balance her love of learning and need for self-expression with her religious faith. The Heresy of Love was first performed by the Royal Shakespeare Company in Stratford-upon-Avon in 2012.

HARVEST by Manjula Padmanabhan
April 21–29, 2017 in the Center for the Performing Arts
The New York Times called Manula Padmanabhan's "sci-fi parable" Harvest "a dark fantasy about a high-tech racket in body organs." Set not that far off in 2022, Harvest focuses on the life of a poor, unemployed man in a third-world country. In need of money and some modern conveniences like running water, Om agrees to sell his organs to be harvested for the benefit of someone in a wealthier country. The company behind the harvesting, InterPlanta, acts as Big Brother, looking in on Om and his family to see how their investment is working out, as the poor organ donor begins to realize what kind of bargain he has made.

* I am counting Peter Stone, who wrote the book for 1776, as its playwright for this tally.
Posted by JulieK at 1:38 PM