Summer at the Station: LEAVING IOWA and BAT BOY

Today may be the first official day of summer, but the Station Theatre in Urbana has already started their summer celebration. The Station Theatre production of Leaving Iowa opened last week, with performances continuing through July 2, while Bat Boy is on deck, scheduled to run July 14 to August 6. 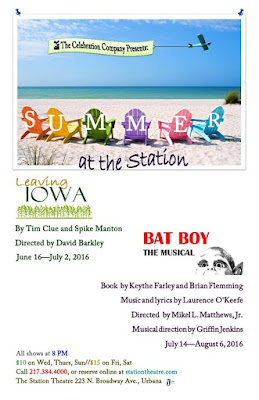 Both shows are the kind of lighter fare the Station tends to look for during the summer months, with Leaving Iowa, a memory play that finds comedy in family road trips, absolutely on target for this travel-intensive time of year. Yes, my family took endless vacations in the car, and we almost seemed to be in Iowa, just like the people in the play by Tim Clue and Spike Manton. 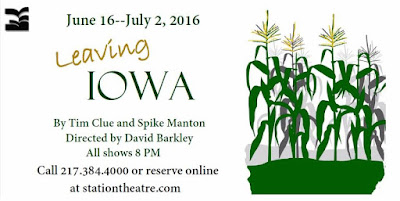 As for Bat Boy... This kicky little musical -- with book by Keythe Farley and Brian Flemming and music and lyrics by Laurence O'Keefe -- is torn right from the pages of the most outrageous tabloid you can imagine. Or at least the Weekly World News. The musical tells the tale of a misunderstood kid (or half-kid, half-bat) who grew up in a cave and is quite feral. When he is discovered in his cave (and he bites one of the rescuers) he is dragged out and taken to the home of the local veterinarian, whose kindly wife takes him under her wing. But the rest of the town isn't happy at all to have a strange creature like Bat Boy in their midst, and hysteria ensues. There are serious messages about tolerance of those who are different underlying all the camp and capers, but the catchy score is hard to shake. I saw Bat Boy at least ten years ago, but I can still hum "Hold Me, Bat Boy." 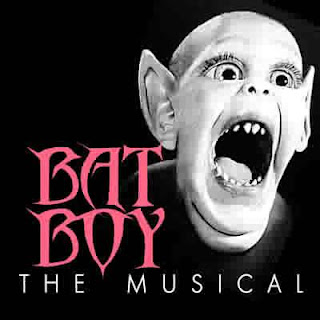 For information about either show or to make reservations, visit the Station Theatre website or call 217-384-4000.
Posted by JulieK at 3:59 PM