Who'll Be Back When NASHVILLE Debuts on CMT? 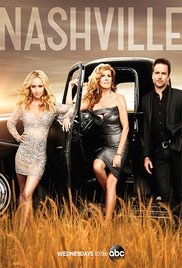 Fans of Nashville, the television show about country music superstars and wannabes, were sad when ABC decided to cancel the series in May, but Lionsgate, which produced the show, seemed optimistic even then that they would find another outlet for it. That outlet turned out to be country music network CMT, with network president Brian Phillips offering, "We see our fans and ourselves in this show, and we will treasure it like no other network. Nashville belongs on CMT."

The official pick-up announcement came a couple of weeks ago, but there was still some uncertainty as to some of the details, including which stars would be going along to CMT.

The dust seems to have settled, with TVLine's Michael Ausiello reporting today that stars Connie Britton and Hayden Panettierre will join Charles Esten (Deacon), Jonathan Jackson (Avery), Sam Palladio (Gunnar), Clare Bowen (Scarlett), Lennon Stella (Maddie), Maisy Stella (Daphne) and Chris Carmack (Will) when Nashville makes it move. As previously announced, Will Chase (Luke) and Aubrey Peeples (Layla) will not be coming along for the ride.

The new Nashville will also feature new showrunners, with thirtysomething creators Marshall Herskovitz and Ed Zwick stepping into that role.