The Sullivan Project: Take 2 with Donald Margulies and LONG LOST 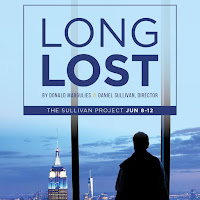 Since 2013, Daniel Sullivan, the much-lauded director of plays like Proof, Rabbit Hole and Dinner with Friends, has curated a project within the University of Illinois' theater department -- Illinois Theatre -- to bring new, in-development works to Urbana. Sullivan holds the Swanlund Chair within the department, but it's his national resume that is impressive and deep, with honors ranging from induction into the Theatre Hall of Fame in 2011 to a Drama Desk Award, two Lucille Lortel Awards, an Obie and an Outer Critics Circle Award. Three plays he's been associated with have won the Pulitzer Prize and he has been nominated for the Tony for Best Director six times, winning that award for Proof.

He has worked extensively with playwright Donald Margulies, directing Sight Unseen, Brooklyn Boy, Time Stands Still and The Country House on Broadway along with Dinner with Friends Off-Broadway at the Variety Arts Theatre. It should come as no surprise that this year's Sullivan Project put Daniel Sullivan back together with Donald Margulies, with a new family drama called Long Lost.

Like Lost Lake, a David Auburn play workshopped through the Sullivan Project in 2014, Long Lost* was still in development, with the playwright around to make changes and tweaks through the rehearsal process. Margulies first brought Long Lost, or at least the beginning of it, to the Ingram New Works Festival in Nashville last summer, with actor David Alford, a resident of Nashville, in the role of Billy, the ne'er-do-well brother whose arrival jumpstarts the action. Alford is a familiar face to fans of Nashville the TV show, where he played Bucky Dawes, the patient, much put-upon manager of country superstar Rayna Jaymes, played by Connie Britton.

The beauty of The Sullivan Project is the chance to see new scripts from America's best playwrights, as well as Equity actors at their top of their game. Alford's role as Billy was very different from Bucky, as you might imagine, and he was terrific, as was Kelly AuCoin, who played opposite him as David, the more successful brother, the one who is none too pleased when his bad penny of a sibling turns up. Kelly McAndrew and Michael Goldsmith completed the cast, playing David's wife and son, and they were also on target, even if their roles didn't feel quite as credible or as fully developed as the two brothers'.

McAndrew was part of this spring's Humana Festival of New American Plays as the title character in Brendan Pelsue's dystopic Wellesley Girl. She, too, played a starkly different character in that one. It's always fun to see such good actors show off their versatility.

Although I wasn't given any kind of order not to review Long Lost, I also wasn't invited to offer my thoughts, plus it's pretty clear that the whole point of this way-out-of-town try-out is to "help playwrights realize the creative impulse" with professional productions staged "away from the high-beam intensity of the big-city media machine," as producer Jeffrey Eric Jenkins' program notes put it. I am under no illusion that my blog possesses high beams or any sort of media machine, but still... I understand the need to let a play gestate without a lot of outside criticism. So the above comment about the fact that the wife and son seemed less credible is the extent of my critique.

Lost Lake went on to a New York production, and I'm guessing Long Lost has the same goal. Like the former play, this one has roles that should be catnip to mature actors. And even if Long Lost goes nowhere, The Sullivan Project is a worthy effort on its own, as a way to encourage and support new work that needs to get up on its feet before it can run. Kudos to Sullivan and Jenkins, who is the head of Illinois Theatre, for making it happen twice. Here's to the third iteration of The Sullivan Project, whenever that happens.

* If you've noticed, like I did, that the first two works in The Sullivan Project both have the word "lost" in their titles, then you also may be speculating on the next plays that would continue the string. Not with "lost" specifically, but with one-syllable, four-letter words beginning with L which flip from the first position to the second. After Long Lost, can we expect Life Long in 2018? And then Love Life in 2020. An then Last Love in 2022. That's where I run out of options, but if you have a four-letter L word that can go before Last, feel free to send it along. Of course, it may just be that "lost" is a prime target for drama, in which case my other L-words aren't going to work, anyway.
Posted by JulieK at 3:18 PM