SHE LOVES ME Live From Broadway, Tonight on BroadwayHD 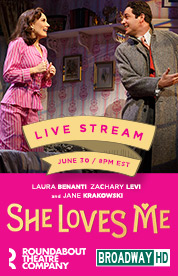 If you want to see the current Broadway production of She Loves Me, but you can't get to New York right now, never fear. BroadwayHD.com will be live-streaming the show tonight at 8 pm Eastern time. And after the live broadcast, BroadwayHD will offer the show on demand for another week.

The cost to see it tonight is $9.99, and Olivia Clement at Playbill says this livestream is included in an annual subscription to BroadwayHD, although not a monthly subscription. And once the video has been edited, it will be added to the BroadwayHD library, where titles are available for $7.99. However you slice it, that's a lot better than current Broadway ticket prices.

What is She Loves Me? A confection from Broadway's golden years, based on the Miklos Laszlo play Parfumerie, which spawned the films The Shop Around the Corner, In the Good Old Summertime and You've Got Mail as well as the Masteroff/Harnick/Bock musical She Loves Me. Masteroff's book hews close to the original, with its charming Hungarian perfume shop setting and a romantic plot that pairs two clerks from the same store who can't stand each other at work even as they are falling in love as anonymous pen pals.

In its original Broadway production in 1963, Hal Prince directed She Loves Me with Barbara Cook and Daniel Massey as the pair in question, with Barbara Baxley as a co-worker who doesn't have the best taste in men and Jack Cassidy as the snake in the parfumerie. In its current version, Laura Benanti and Zachary Levi star as Amalia and Georg, Jane Krakowski and Gavin Creel take on Ilona and Kodaly, the secondary pair of lovers, under the direction of Scott Ellis for the Roundabout Theatre. It opened in March of this year, was nominated for eight Tony Awards, and won one for its delicate and beautiful scenic design by David Rockwell.

In other She Loves Me news, Ghostlight Records will release the cast recording online and in stores on July 29. The cast recording featuring Benanti, Creel, Krakowski and Levi is already up at iTunes and other digital sources.