Diving Into DONTRELL, WHO KISSED THE SEA with Illinois Theatre 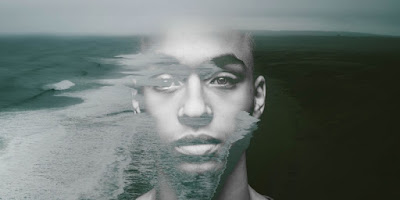 You'll find some deep water and deep issues in Nathan Alan Davis's Dontrell, Who Kissed the Sea, a stunning piece of work about African-American identity in 2016, about the need for roots and history, about how we live and interact with the world around us.

The story follows a young man named Dontrell who has a strange, shocking dream one night, filled with haunting images of ancestors he has no waking knowledge of. In Dontrell's dream, a man who looks very much like his father jumps overboard from the slave ship where he is imprisoned, finding a kind of freedom in the briny deep. This ancestor leaves behind a pregnant woman who will finish the journey to America with her child, beginning the saga of Dontrell's family on this continent. Dontrell knows his parents don't want to hear about this dream or how it continues to push him into deeper and deeper waters. Someway, somehow, Dontrell must find the spirit of that ancestor, lost somewhere in the Atlantic so long ago.

Dontrell, Who Kissed the Sea is an award-winning play which earned a slot in the New Play Network's Rolling World Premiere project, launching it into five different productions in 2015 in regional theaters from Washington D.C. to Los Angeles, from Indianapolis and Cleveland to Eugene, Oregon.

Although Dontrell rolled from coast to coast last year, the play has some serious Illinois connections. Playwright Nathan Alan Davis is a native of Rockford, Illinois, and he earned his BFA at the University of Illinois. His plays are set in places like Rockford and southern Illinois and he has worked with Chicago Dramatists.

For Illinois Theatre, Dontrell is directed by Tyrone Phillips, another U of I alum as well as one of the founding members of Chicago's Definition Theatre Company. Phillips has emerged as a major director in Chicago, with accolades and honors for shows like his Byhalia, Mississippi, which earned six Jefferson Awards, including one for his direction.

As Dontrell unfolds in the Studio Theatre at Krannert Center for the Performing Arts, it's clear Phillips is the perfect match for this particular play at this particular moment, giving it a vivid, expressionistic style and a strong heartbeat. He has directed his ensemble so tightly (and they are working together so tightly) that we can hear them breathe as one in the small space of the Studio Theatre. It's astonishing.

Among the cast, Vincent Williams hits a sweet note of naivete with Dontrell and Diana Gardner has the right mix of steel and quirkiness to make lifeguard/soulmate Erika appealing. Raffeal A. Sears, Noelle Klyce, Marlene Slaughter and Maya Vinice Prentiss are important pieces of the puzzle as Dontrell's alternately supportive and despairing family, while Xavier Roe is a revelation as Robby, a childhood friend with all the right moves. In the ensemble, Ryan Luzzo and Christian Wilson look like clockwork throughout, and Madison Freeland, Brienna Taylor, Alexis Walker and especially Danyelle Monson bring Dontrell home with their fierce moves.

C. Kemal Nance's dynamic choreography -- along with the cast's commitment to it -- is a major part of what keeps the story of Dontrell and his mystical search for his ancestry afloat. The physical part of the show is beautifully realized, with individual pieces that take your breath away, from a repeated gunshot and fall at the beginning to a fantastic fantasy ending. And, oh my, that end! When Dontrell finds the place in the ocean he's been looking for, the theatrical meets the emotional in a swirling celebration of ancestry, identity and validation.

Phillips' designers also add to the overall Dontrell experience, with Luke Parker's evocative, submersive sound design, Paul Kim's colorful array of costumes, Eric Van Tassell's assertive lighting and Nicholas James Schwartz's simple, creative scenic design combining to make a big impact. I especially liked the overlapping images that tie together theater, ships and slavery, with ropes looped around the gallery and from the ceiling, fabric that brings to mind sails as well as stage curtains dropping into the playing space, and weathered wood planks that move to form a dinner table, a boat or a bed from one scene to the next. It's all imaginative and on target as part of the thought-provoking Dontrell experience.

Kudos to the ATCA/Steinberg Awards, the New Play Network and Illinois Theatre for picking Dontrell, Who Kissed the Sea and giving it the spotlight it deserves and to Tyrone Phillips and his team for bringing it alive at Krannert Center.

DONTRELL, WHO KISSED THE SEA
By Nathan Alan Davis

The Studio Theatre
Krannert Center for the Performing Arts