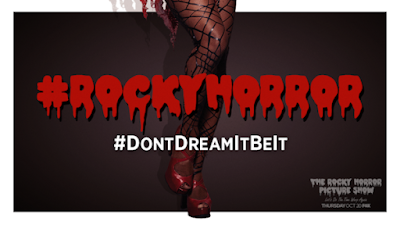 It's that time of year again. Rocky Horror time, of course. As Halloween looms, The Rocky Horror Picture Show and its variations show up. And by variations, I mean the movie plus costumed audience members, the movie with newspapers and squirt guns and toast, the movie with a whole cast in front of it acting it out, and now, a new TV version on Fox where you are encouraged to wear a costume, make props and act it out at home.

First up this year is the TV show Rocky Horror, with Orange Is the New Black star Laverne Cox as Frank-N-Furter, the mad bustier-wearing scientist from Transylvania who is trying to create a hot guy in his laboratory. The original Frank, Tim Curry, shows up as the narrator, while Broadway stars Ben Vereen, Annaleigh Ashford and Reeve Carney add plenty of talent to the cast as Dr. Scott, Columbia and Riff Raff. To get ready, you can sneak a peek at clips, peruse the cast list or download a diagram to guide you through the interactive activities. This Rocky Horror Picture Show (maybe it should be called The Rocky Horror TV Show) airs tonight at 8 pm Eastern/7 Central on Fox. 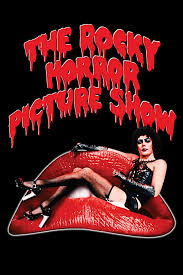 And if a new version of the cult classic isn't filling you with antici...pation, you'll have plenty of opportunities to see the 1975 original. The Normal Theater will air it in all its Time Warped glory on October 27, 28 and 29, with a 7 pm show the first night and two shows -- 7 and 10:30 pm -- on the 28th and 29th. All five shows will feature a full "shadow cast" from Illinois State University's Theatre of Ted, plus there will be a limited number of goodie bags for sale (presumably including things like playing cards and party hats, but not rice, water pistols, toast or lighters, since they have a "No food, no water and no fire" rule happening) for t.

Meanwhile, over in Champaign, the Art Theater Co-op will screen the film four times, with shows October 21, 22, 26 and 27 at 10 pm. Their shows will also be fronted by live performers, this time from Illini Student Musicals.

If you can get from Normal to Champaign in an hour and 20 minutes on the 27th, you could conceivably see The Rocky Horror Picture Show nine times between tomorrow and the end of the month. And if you add in an unlimited number of reruns (or restreams) for the Fox TV movie, well, it could be a very Rocky Halloween.
Posted by JulieK at 3:30 PM