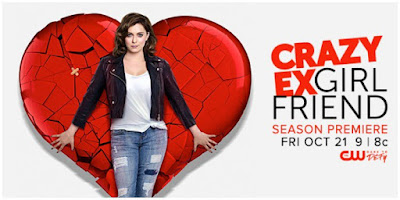 Rebecca Bunch, the character who brings the crazy to CRAZY EX-GIRLFRIEND, will be back in a new time slot this Friday, October 21, at 9 pm Eastern/8 Central. It's probably not good news for the show that it's been shipped to Fridays, a TV wasteland, but it's good news for people like me who aren't averse to watching something during that wasteland.

Creator Rachel Bloom plays Rebecca in all her off-balance glory, with a boffo musical number or two every episode. My favorite last season was the Fred-and-Ginger inspired "Settle for Me," where one of the men in Rebecca Bunch's life, Greg (played by the amazing Santino Fontana) tried to get her to give him a shot even though they both knew he wasn't her first choice. There was lots to choose from, however, including "A Boy Band Made Up of Four Joshes," which put Rebecca's fantasy man, Josh, as every member of a bouncy boy band and gave Vincent Rodriguez III a great spotlight for his dance talents.

This season, we're getting a new theme song to illustrate that Rebecca's life has changed from moving all the way from New York to West Covina to be near her teen crush Josh to actually thinking he's in love with her and all her dreams are coming true. The AV Club describes the new song this way: "Rebecca, done up like a 1930s showgirl, croons about how she can’t be 'held responsible' for the insane things she does because she's in love." In other words, Rebecca is just as unhinged as ever and hijinks will ensue.

If you want a hint as to what that will mean in the first episode, Rebecca will sing a song spoofing Beyonce and "Lemonade" song about supposedly being satisfied with the tiny droplets of affection (or "Love Kernels") she gets from Josh. As with most of the Crazy Ex-Girlfriend musical numbers, there is something sharp and pointed underneath the zippy lyrics.

I wasn't that happy with Season 1's final episode, where Greg acted stupid at a wedding reception and Rebecca and Josh got together for sexy time, whereafter Rebecca confessed that she only moved to West Covina for him. But it does set up some interesting plot possibilities for Season 2, now that Josh knows the truth, Greg has to deal with Josh and Rebecca as a couple, and Rebecca is no more in touch with reality than she ever was. Plus the musical numbers are worth the DVR space all by themselves.

Crazy Ex-Girlfriend and its new theme song (plus its "Love Kernels") premiere Friday at 8 Central on the CW.
Posted by JulieK at 11:23 AM