IT CAN'T HAPPEN HERE -- Or Can It? ISU Hosts Staged Reading Tomorrow at 7:30 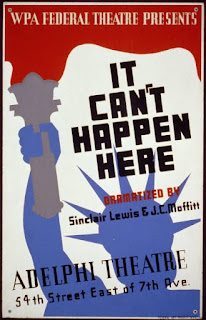 Nobel Prize winner Sinclair Lewis wrote a novel called It Can't Happen Here -- "a cautionary tale about the fragility of democracy" -- in 1935, with Hitler on the rise in Germany, a controversial politician from Louisiana named Huey Long beginning a presidential campaign, and the Great Depression and its economic woes opening the door for demagogues promising America "a return to greatness."

Lewis wrote the book to wake up the American public to the idea that it could happen here, a notion that has kept It Can't Happen Here timely (and scary) ever since. More than one voice in the media has noticed the similarities to Donald Trump's campaign.

Signet Classics put out a new edition in 2014, noting that It Can't Happen Here "juxtaposes sharp political satire with the chillingly realistic rise of a president who becomes a dictator to save the nation from welfare cheats, sex, crime, and a liberal press. Called 'a message to thinking Americans' by the Springfield Republican when it was published in 1935, It Can't Happen Here is a shockingly prescient novel that remains as fresh and contemporary as today's news."

The book spawned a stage adaptation very quickly, with Lewis himself and John C. Moffitt offering a play version that opened across the country in a flurry of simultaneous productions in October 1936. There were various attempts to make a movie out of the book, but they all faded away, although a TV movie did surface in 1968. There's at least one account that the TV miniseries (and subsequent series) V was originally intended as an adaptation of It Can't Happen Here, but the network felt that the American populace would respond better to a show where reptilian aliens were the bad guys instead of home-grown fascists. Go figure.

Earlier this year, with politicians flinging around the same rhetoric used by Lewis's characters, Berkeley Rep staged a new adaptation of the play written by Tony Taccone and Bennett S. Cohen. The central character in It Can't Happen Here, one Berzeluis "Buzz" Windrip, is charismatic and ambitious, ready to use whatever weapons he can grab -- hate, fear, lies, hysteria, bigotry -- to put himself in power. And once he's there, his weapons just get bigger and scarier to maintain his position and his empire.

To underscore the timeliness of the material, the Sinclair Lewis Foundation/Society is hosting nationwide staged readings of the Taccone and Cohen version of the play. Right here in Bloomington-Normal, we can see a staged reading of this incredibly important play, directed by Illinois State University professor Lori Adams and Ball State's John Tovar, at 7:30 pm in ISU's Westhoff Theatre.

This event is free, which means tickets are not being sold and you will need to get there on time to ensure a seat. For more information on the Normal take on It Can't Happen Here, click here to see the event's Facebook page.
Posted by JulieK at 1:14 PM