It's Way Past Time for October News

It's a busy month on local stages and screens and I'm already a few steps behind. I took a trip to the Stratford Festival in Canada, and it was wonderful, but it means I wasn't here to put together all these bits and bobs on October 1. I hope you can all handle not finding out till October 5. Let's get this October party started, shall we? 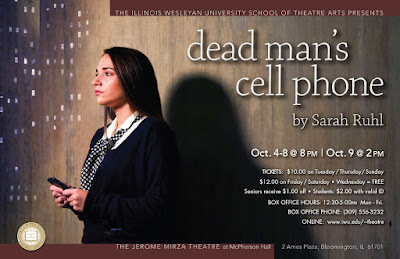 I'm a little late getting the news out about the Illinois Wesleyan production of Sarah Ruhl's Dead Man's Cell Phone, which opened earlier tonight in the Jerome Mirza Theatre in McPherson Hall. Dead Man's Cell Phone begins when a woman in a coffee shop hears a ringing phone that just won't stop, sending her off in search of answers about the person who owned the phone. She finds a lot more questions, which turns out to be a good thing for all of us in this inventive, unsettling play about love, life and technology. Dead Man's Cell Phone plays October 4, 5, 6, 7 and 8 at 8 pm and October 9 at 2 pm. 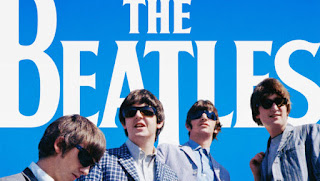 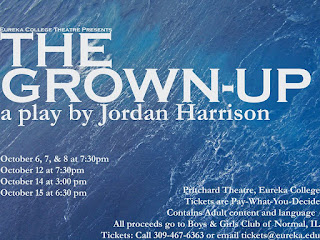 Eureka College Theatre looks to Jordan Harrison's 2014 play The Grown-Up, a piece I saw at the Humana Festival of New American Plays, for its October entry, with performances October 6 through 15 at Pritchard Theatre. The Grown-Up is an adventurous romp somewhere between Alice and her Lookingglass and Peter Pan and his pirates. In this instance, the child in search of adventure is a boy named Kai who runs off to see where a magic crystal doorknob takes him. As Kai bends time and imagination, he runs into a salty old seafarer, his sister and maybe even his own future as a grown-up. For Eureka College, Cody Wirth plays Kai, with Garrison Green, Vic Griffith, Haley Joseph and Kendall Katz along on his journey. 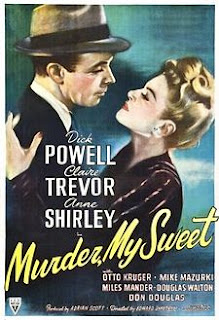 The Normal Theater picks up weeks 3 and 4 of its Six Week Film School, focusing on Murder My Sweet on October 12 and The Postman Always Rings Twice on October 26. They're both deadly, delicious mystery movies, with the first following PI Philip Marlowe (Dick Powell) on a search for the double-crossing girlfriend of a mug named Moose Malloy and the second looking into the seamy private lives of an unhappy wife (Lana Turner) and the drifter (John Garfield) she gets to do her dirty work. Both films begin at 7 pm on their respective Wednesdays and they will be followed by a discussion led by ISU professor William McBride. For all the details, click here.

You get a second chance to see Mr. Burns: A Post-Electric Play, the Anne Washburn play that riffs on The Simpsons as a cultural icon and possibly a religious text in our dystopic future, when it begins at the University of Illinois October 13. Lisa Gaye Dixon directs this Illinois Theatre production in performance through October 23. Mr. Burns and friends will play in the Colwell Playhouse, but you can also see Nathan Alan Davis's Dontrell, Who Kissed the Sea, which began last week, through October 14, and Anna Ziegler's take on The Minotaur beginning October 27, both in the Studio Theatre.

Waiora continues at Illinois State University's Center for the Performing Arts through October 9, while the second and third shows of the ISU season -- two short plays performed together in one evening of theater -- open October 21 in Westhoff Theatre. Those short plays are The Coffee Bar and The Walls, with The Coffee Bar hailing from Egypt and The Walls from Argentina. They are both provocative and political, with plenty to say on issues of privilege, freedom, repression and art. Janet Wilson directs The Coffee Bar with a cast that includes Gina Cleveland, Daija Nealy and Simran Sachdev. Bruce Burningham directs The Walls; his cast includes Daniel Balsamo, Daniel Esquivel and Ryan Groves. 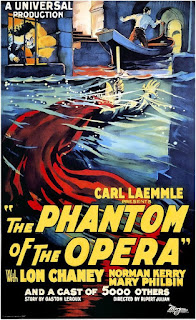 Entering the Halloween entertainment sweeptstakes, the Bloomington Center for the Performing Arts is offering the silent film version of The Phantom of the Opera, played with live organ accompaniment just like it would've been back in 1925, at 7 pm on October 25. Lon Chaney (the original, not Lon Chaney, Jr.) may've been silent, but he set the bar high for all the Phantoms who followed with his portrait of a sad, swirling Gothic monster. As Roger Ebert put it, "[T]he Phantom is invested by the intense and inventive Lon Chaney with a horror and poignancy that is almost entirely created with body language." All it takes is one hand gesture to convey "great weary sadness." And it's that "great weary sadness" that makes his a Phantom to remember.

October 27 to 29 finds the return of the Illinois Shakespeare Festival's annual ShakesFEAR event, combining some of Shakespeare's scary characters with the haunted house concept, except in this case it's the grounds around Ewing Manor getting haunted. Tours leave every ten minutes between 7 and 9:30 pm and last approximately 25 minutes. If you want to get tickets ahead, check out this page for all the information.

As always, I will add individual pieces on other shows and events I find out about in the meantime.
Posted by JulieK at 7:52 PM