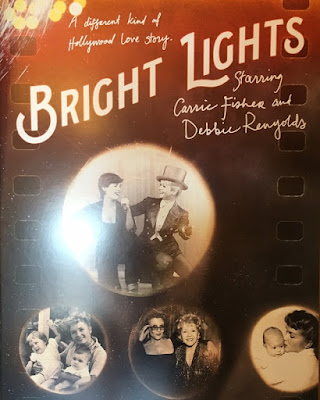 In the midst of a two-day Logo marathon to remember Debbie Reynolds, who passed away December 28, just one day after the death of her daughter, Carrie Fisher, HBO has also announced plans to move up the schedule on a documentary called Bright Lights: Starring Carrie Fisher and Debbie Reynolds.  Although it was originally scheduled for sometime later in 2017, Bright Lights has been moved to Sunday January 7 in the wake of the tragic loss of both Hollywood legends. HBO was already set to repeat Wishful Drinking, a 2010 feature based on Fisher's "hilarious and honest one-woman show"on New Year's Day.

Starting at 4 pm Central time today, Logo will show episodes of Will & Grace that featured Reynolds as Grace's mother, plus at 11 pm Central they will be airing a RuPaul's Drag Race episode with Reynolds as guest judge. At midnight, it's time for an episode of Roseanne written by Carrie Fisher that showcased Reynolds as Roseanne's mother-in-law, with a pair of Golden Girls episodes where Reynolds showed up as a possible new roommate after that. The Golden Girls two-partner will run again at 5:30 am, followed by all twelve Will & Graces starting at 6:30. Logo finishes up its tribute New Year's Day with the movie Sister Act, which Fisher co-wrote, shown at 4 pm and 10 pm.

Later in January, Turner Classic Movies will devote a whole day of programming to Reynolds, who was a particularly good friend of the network. With TCM, Reynolds shared a passion for the preservation of classic movies and memorabilia. They offer a bio that serves as a tribute here along with the list of films scheduled for January 27.