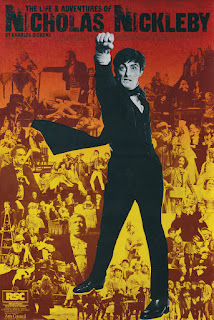 I think my first trip to New York City happened in the summer of 1983. That means I wasn't there in time to see the vividly theatrical, eight-and-a-half-hour, two-night adaptation of Charles Dickens' The Life and Adventures of Nicholas Nickleby that playwright David Edgar, directors Trevor Nunn and John Caird and a cast of 42 actors from the Royal Shakespeare Company had created together, first for performance at the Aldwych Theater in London and then at the Plymouth on Broadway.

There was a long period during my formative years when Nicholas Nickleby was my favorite book. Of all books. I have no idea why it caught my imagination at a time when my peers were clinging to To Kill a Mockingbird and The Catcher in the Rye, but there you are. My fondness for Nicholas Nickleby in book form meant that I was well aware of the RSC project, even as it never occurred to me that I could actually see it on stage. 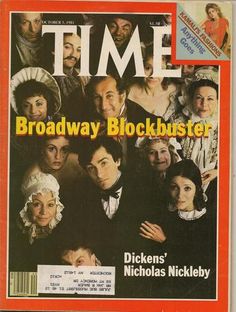 I might've wished there was a way to get to London in 1980 or New York in 1981, but I was in law school, I'd never been to either place, I'd never seen a Broadway show, and that kind of jaunt was simply out of my realm of possibility. But then something called the Mobile Showcase Theatre came to my rescue, showing a filmed performance of the RSC's Life and Adventures of Nicholas Nickleby as a four-night event on my local PBS station.

That filmed Nicholas Nickleby starred Roger Rees as Nicholas, offering energy, integrity and depth as the young man trying to keep his own sense of goodness and kindness together even as he faces cruelty and meanness in the world. David Threlfall, Emily Richard, Edward Petherbridge, Alun Armstrong, Suzanne Bertish, Lila Kaye, Lucy Gutteridge, Bob Peck, Christopher Ravenscroft, John McEnery and John Woodvine are just some of the actors surrounding Rees in this amazing company. As an ensemble, they create an array of sharply realized characters and dramatic pieces that fit together beautifully. I will never forget characters like Newman Noggs and Peg Sliderskew or the way the company slams doors in Ralph Nickleby's face. Rees may have provided the emotional center and the overall arc, but it's the company together that turns Nicholas Nickleby into something special.

I had a VCR by 1982 but I screwed up when I tried to tape all of this Nicholas Nickleby, which was originally shown in four parts over four nights. When PBS began selling a set of nine one-hour VHS tapes of the whole thing, I snapped them up, even though they are not what I really wanted, which was the four-night Mobile Showcase I remember. But the subsequent four-DVD set for Nicholas Nickleby is notorious for being shoddily put together, with such poor decision-making that they split one scene over separate discs.

BroadwayHD has now announced that the full Nicholas Nickleby, split into nine parts like the A&E VHS set, is streaming on its site. Click here for information on signing up for an account so you can sit back and watch it.
Posted by JulieK at 12:38 PM