See ALLEGIANCE Tonight -- One Night Only -- in Cinemas Nationwide 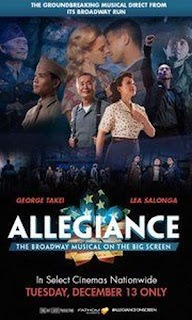 Tonight's the night for the Broadway musical Allegiance on the big screen. For one night only, Fathom Events is bringing Allegiance, which starred Telly Leung (Rent, Glee, Pacific Overtures), Lea Salonga (Miss Saigon) and George Takei in its Broadway production, to cinemas nationwide, including Willow Knolls 14 in Peoria, Savoy 16 south of Urbana, and Springfield 12 in Springfield. Allegiance plays at 7:30 pm tonight in all three of those theaters. Click here for ticket information.

Allegiance's story was very personal for Takei, best known for his role as Sulu on the original Star Trek. Like the characters in the show, Takei was forced to live in an internment camp for Japanese-Americans during a shameful chapter in American history after Pearl Harbor. With songs and scenes, Allegiance addresses how the prisoners (because, let's face it, the "relocation" or "internment" camps were really prisons under a nicer name) were ripped from their homes and jobs -- some from their families -- to live in spartan conditions without medical care or contact with the outside world. No trials, no due process, just a lot of American citizens punished and isolated based on their race.

George Takei was born in Los Angeles and he was only a boy when he and his family were sent to live in a horse stable converted to house people in Los Angeles, an internment camp in Arkansas and finally another camp back in California. In Allegiance, the members of the Kimura family are forced to leave their California farm, which is sold off for pennies without their consent, and carted off to a camp in Wyoming for the duration of World War II.

In addition to Leung, Salonga and Takei, the musical's cast included Michael K. Lee, Christopheren Nomura, Katie Rose Clarke and Greg Watanabe. It was directed by Stafford Arima and choreographed by Andrew Palermo. Jay Kuo wrote the music and lyrics, while Marc Acito, Kuo and Lorenzo Thione collaborated on the book.
Posted by JulieK at 1:00 PM