I am bumping up two old pieces I wrote about what I watch on New Year's Eve. As it happens, neither is on my dial this year -- the closest thing is the mini-marathon at Turner Classic Movies with the three iterations of That's Entertainment plus That's Dancing from 7 pm to about 4 am Central time -- but that doesn't mean I can't do my own film fest right here at home.

First, my take on Swing Time, one of the classic Fred-and-Ginger pics that I like to watch every New Year's Eve. This was written in 2010, when Swing Time was the only Fred-and-Ginger I could find airing that night. Left to my own devices (and DVDs) I will probably watch three or four from my collection, maybe starting with Flying Down to Rio (1933) and ending with Shall We Dance (1937).

After that, some notes on why I love Holiday, a movie that is my idea of perfection. And, yes, I also own a copy of that. One cannot depend upon the vagaries of television programmers when planning one's New Year's Eve. 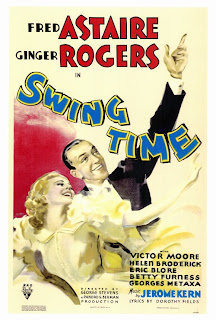 Anybody who knows me knows I love Fred Astaire movies. I don't know if it's in my gene pool (my mom was also a fan) or a learned thing (my mom and I watched a lot of his movies together) but... Whatever the reason, I'm glad I have this thing for Fred Astaire.

Back in the 70s, one of the Chicago TV stations used to run Fred Astaire & Ginger Rogers marathons on New Year's Eve. I remember several times telling my date I had to be home by midnight so I didn't miss Top Hat or Shall We Dance or The Gay Divorcee. They don't seem to be doing that anymore, but to me, Fred & Ginger need to be dancing on New Year's Eve or it isn't New Year's Eve.

...Swing Time is not actually my favorite among the Fred movies (I don't like second banana Victor Moore, I don't like the silly forced laughing bit, I don't really like Fred wearing a bowler hat, and parts of the plot are very silly, especially the one involving whether formal trousers need cuffs) but it does have its charms (the Jerome Kern/Dorothy Fields score, some gorgeous dances, and dances used beautifully to advance the plot).

Although "The Way You Look Tonight" has become somewhat overexposed in a whole lot of movies and TV shows, it's still a lovely song, and it's quite appealing when Fred (as Lucky Garnett, dancing gambling man) sings it to Ginger (as Penny Carroll, a dance instructor), even if her hair is covered in shampoo and bubbles. Mr. Astaire always had a way with the sincere songs, and his delivery is as sweet and charming as it gets on "The Way You Look Tonight." Breathless charm, indeed.

"Never Gonna Dance" is also a classic for good reason; it gets a big, swoony production number involving sweeping Art Deco staircases and it involves all kinds of angst and heartache because of its place in the plot. There are all kinds of backstories on this dance that say they filmed endless takes into the wee hours and Ginger was bleeding into her shoes and all sorts of things... Whether you believe them or not, it's still a moving and lovely piece of dance and romance on film.

But my favorite number is "Pick Yourself Up," a sprightly piece where Lucky pretends to be a bad dancer who improves amazingly quickly in order to save Penny's job. They dance all around a dance studio under the disapproving eye of Eric Blore, an adorable supporting player you'll see throughout the Astaire/Rogers flicks, so that's one reason to enjoy it. Number 2: Ginger got a flippy black dress that makes her look as cute as she ever looked. And number 3: I absolutely love the little lifts back and forth over a tiny fence around the dance floor. They both look like they're having a great time, and when Fred pops out the real Astaire dance moves, there is a joy of performance that just zings off the screen. I'm smiling just thinking about it. 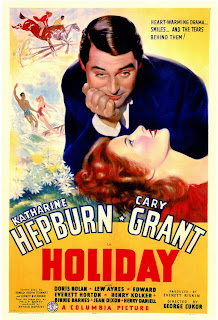 Holiday (the 1938 film based on a Philip Barry play, starring Cary Grant and Katharine Hepburn, not the more recent thing with Kate Winslet, Jack Black and Jude Law) is one of my favorite movies of all time. Maybe THE favorite.

I've been asked more than once why I like Holiday so well or why I like it better than The Philadelphia Story or Bringing Up Baby, better-known Grant/Hepburn collaborations. The answer is partly grounded in the fact that I got attached to Holiday when I was ten or eleven, and you really don't know why you like things at that age. You just do. But there's more to it than that.

And then there's Kate. The plot of Holiday treats her far better than The Philadelphia Story where everybody keeps telling her that she's too perfect, she's an ice queen, she's judgmental, she needs to change while the male philanderers (her father) and alcoholics (her ex) are just fine the way they are. That always struck me as sexist and unpleasant and not very nice. Here, she's trying to do the right thing and find her own way, stuck in a pretentious, wealthy family she doesn't like much and at the same time desperately attracted to the man her sister has brought home as a fiance. As Linda Seton, Ms. Hepburn is as lively and vivacious as ever, plus she's warm and funny and nobody is blaming her for anything.

Holiday ... [is] part of a Cary Grant box set. I plan to watch it on New Year's Eve, since that's the holiday I like the best in the movie. I should also note that the title Holiday does not refer to Christmas or New Year's, but to Johnny's plan to take a long holiday, a vacation, now that he's made the money he wants.

Right there with you, sister.