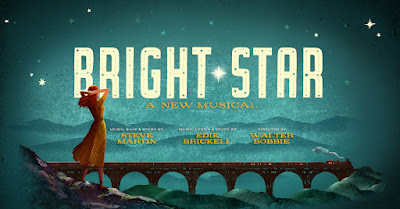 Although the Broadway musical Bright Star earned mostly positive reviews and was nominated for five Tony Awards and seven Drama Desk Awards, winning one for its music, along with winning the Outer Critics Circle Award for Best Musical, it had to compete with Hamilton mania. When all was said and done, Bright Star closed last June after 109 performances.

Creators Steve Martin and Edie Brickell weren't quite ready to say goodbye to their show, however, scheduling a reunion concert for the original cast at New York City's Town Hall tonight. Martin and Brickell will also perform as part of this event, and they'll be on hand for a post-show Q & A. The concert is sold out, which is bad news for those who didn't get tickets and want to see it in person, but Theater Mania has come through for those of us willing to experience Bright Star on our computers.

All you have to do is go to the Theater Mania website tonight at 7:30 pm Eastern/6:30 pm Central time to see a livestream of the reunion concert.

So what is Bright Star? "Directed by Tony winner Walter Bobbie and inspired by a real event, this 'downright wonderful' (Newsday) original musical tells a sweeping tale of love and redemption set against the rich backdrop of the American South in the 1920s and '40s. 'Carmen Cusack is a revelation' (Chicago Tribune) as literary editor Alice Murphy, whose relationship with a young soldier just home from World War II awakens her longing for the child she once lost. Haunted by their unique connection, Alice sets out on a journey to understand her past — and what she finds has the power to transform both of their lives."

If you saw Carmen Cusack as Dot in Chicago Shakespeare Theatre's Sunday in the Park with George a few years ago, you already know that she has a beautiful voice. The score for Bright Star is quite different from George, using bluegrass and banjo and a lot of downhome licks to fill out its story, but Cusack inhabits and illuminates the role and the songs just as well as she did Elphaba in Wicked or Nellie in South Pacific or any other role she's played. For Cusack alone, the Bright Star concert is worth seeing tonight.
Posted by JulieK at 4:14 PM