Today is an interesting day on Turner Classic Movies. This morning, they've gone with something of an otherworldly lineup, what with Angel on My Shoulder (featuring the Devil), Angels in the Outfield (divine assistance helps a baseball team), The Heavenly Body (an astrologer gives Hedy Lamarr a reading), Topper and Topper Returns (with ghosts) and I Married a Witch, which has, as you might imagine, a witch. It's a fine batch of movies -- I especially like Fredric March and Veronica Lake as the bewitched couple -- but I don't really know why TCM chose today to spring it. Vernal Equinox? 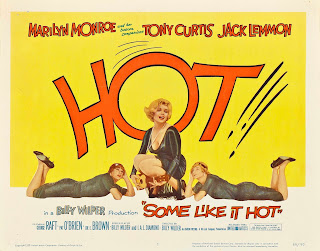 But it's tonight when things really start to pick up. Or fall down. Or dress in drag, pack a crowd of crazies into one stateroom, turn the volume up to 11, take a ride around giant gears, or put Jack Benny in Hamlet's tights. No supernatural beings, just a lot of super comedy. In fact, TCM is showing five of the best-ever comedy films in existence, all of which appear on a recent BBC list of the "100 greatest comedies of all time." 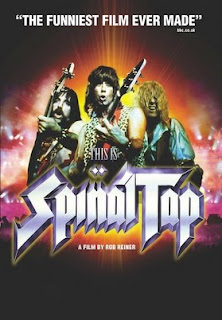 The movies range from Some Like It Hot, starting at 8 pm Eastern/7 Central, to the original version of To Be or Not To Be at 3:30/2:30 am. In between, there's A Night at the Opera, This Is Spinal Tap and Modern Times. In order of viewing, that's a 1959 caper with Tony Curtis, Jack Lemmon and Marilyn Monroe in an all-girl band in the 1920s; the Marx Brothers debating the existence of a Sanity Clause as they mess with an opera company in 1935; a 1984 "mockumentary" about a very bad heavy metal band; a silent film from 1936 with Chaplin in his Little Tramp persona; and a dark comedy from 1942 with a troupe of Polish actors who end up impersonating Nazis (including Hitler) when they get invaded. If that doesn't sound funny, let's just say it has Lubitsch touches all over it. 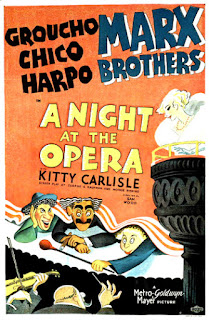 I might argue that A Night at the Opera should be higher than No. 39, but Duck Soup is there at No. 5, and I have a feeling that's getting the most Marx Brothers love, pushing Opera down a bit.

Quibbling about the numbers aside, that is a dandy lineup. As different as these films are from each other, they're each gems. Every single one is worth your time and attention. And repeat viewings.

Email ThisBlogThis!Share to TwitterShare to FacebookShare to Pinterest
Labels: A Night at the Opera, BBC, Modern Times, Some Like It Hot, This Is Spinal Tap, To Be or Not to Be, Turner Classic Movies