The new season for Illinois Wesleyan University's School of Theatre Arts will bow in October, so this is a good time to fill in some blanks on the whos, whats and wheres.

IWU previously announced the main part of their season, with four shows set for the Jerome Mirza Theatre in MacPherson Hall. 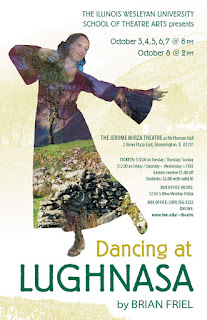 Beginning October 3, we'll see Dancing at Lughnasa, Brian Friel's memory play about five sisters trying to stay together and find some measure of happiness in a small village in rural Ireland in the 1930s. IWU Adjunct Instructor of Theatre Arts Michael Cotey will direct, with a cast that includes Cadence Lamb, Kamilah Lay, Hailey Lechelt, Cami Tokowitz and Libby Zabit as the Mundy sisters, with Tuxford Turner as Michael, the narrator who steps back in time to tell us about his mother and aunts, Sam Hulsizer as Gerry, a charming man who waltzes in and out of youngest sisters Chris's life, and Will Mueller as Father Jack, the older brother who has returned quite changed from a mission in Africa. Dancing at Lughnasa will play for five evening performances at 8 pm October 3 through 7, with a matinee at 2 pm on the 8th.

The classic Rodgers and Hammerstein musical South Pacific will take the stage November 14 to 19, with Emily Hardesty and Madison Steele alternating in the role of cockeyed optimist and Navy nurse Nellie Forbush; Timothy P. Foszcz as planter Emile de Becque, the handsome stranger Nellie meets one enchanted evening; Holden P. Ginn as Lieutenant Cable, a young Marine called by the mysterious power of Bali Ha'i; Megan Lai and Juna Shai alternating as Liat, a beautiful young Tonkinese woman who complicates Cable's life; Paola Lehman and Kira Rangel alternating as Bloody Mary, Liat's wheeling and dealing mother; and Connor Widelka as Seabee Luther Bills, another wheeler and dealer who has a way with a coconut bra.

As we move into 2018, Eugène Ionesco's absurdist Rhinoceros, about the dangers of conformity and groupthink, will be performed February 27 to March 4, with Xanadu, a fantastical musical involving a Greek muse who visits Earth and gets into roller disco, with music and lyrics by Jeff Lynne and John Farrar and book by Douglas Carte Beane, scheduled for performances April 10 to 15.

And what about the E. Melba Johnson Kirkpatrick Laboratory Theatre?

There's an October option there, too. Fault Lines by Ali Taylor, described as a "razor-sharp new comedy that exposes the dilemmas of working in charity today," is scheduled for performances October 27 to 29, with a cast that includes Andrea Froehlke, Morgan McCane, Emily Strub and Braden Tanner.

The Girl Who Fell Through a Hole in Her Sweater, a "witty adventure for young audiences" written by Naomi Wallace and Bruce McLeod, closes out the Lab Theatre season, with performances March 15 and 26.

Tickets for shows in the Jerome Mirza Theatre range from $10 to $12 for plays and $12 to $14 for musicals, with a season package option as well. Lab Theatre shows are $3 for general admission and $2 for students. For advance purchase for Fault Lines in the Lab Theatre, tickets will become available October 19 and for The Girl Who Fell March 8, 2018.

Email ThisBlogThis!Share to TwitterShare to FacebookShare to Pinterest
Labels: Dancing at Lughnasa, Fault Lines, IWU School of Theatre Arts, Rhinoceros, South Pacific, The Girl Who Fell Through a Hole in Her Sweater, Xanadu