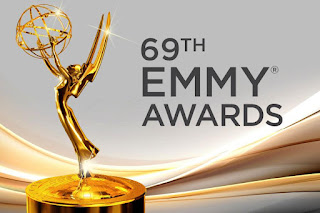 Unlike the presidency, Emmys go to the winners of the popular vote... Did not expect to see Sean Spicer, I'll tell you that. I'm fine with Stephen Colbert's performance so far. Political, but funny and Emmy-related.

I was rooting for Ron Cephas Jones, but I think we all kind of knew this was going to Lithgow, a perennial Emmy favorite.

Another no-brainer. She won last year and was even better this season.

This category was a little harder to predict, but I think it's very well-deserved. And it may portend a good night for Big Little Lies.

Glover is also nominated for a writing Emmy for Atlanta. Hmmm... Can he take that one, too?

Yeah, no surprise there.

Expecting to hear a lot from Handmaid's Tale tonight.

This is four awards for actors from SNL (counting Dave Chappelle and Melissa McCarthy, who won last week during the Creative Arts Emmy ceremony) plus the Variety Sketch award above.

I'm still bitter about the dearth of honors for The Leftovers, but there's no question Ann Dowd deserved and deserves awards for both her stint on that show and her work on The Handmaid's Tale. She knows how to do evil, that's for sure.

I admit I think Master of None is a better show (or at least a funnier show) than Atlanta, so I'm not sorry Donald Glover didn't get that second Emmy for this. The writing on Master of None really is spot-on.

Random production note: Why are they playing Steely Dan's "Reelin' in the Years" after a win by The Voice? Or is there no connection? Because I don't exactly think Walter Becker or Donald Fagen would've done well on that show. Yeah, I think it's just a coincidence, but not very good planning. It wouldn't have gone any better with any of the other choices.

A bit of a surprise, I think. And this may just mean that Feud and The Night Of are shut out. You never know about Jessica Lange and Emmy voters, though.

Production note: The In Memoriam reel is always tough, but this one... Right at the heart. And closing with MTM closing the door at WJM. Wow. Beautiful performance by Christopher Jackson as well as a proper amount of celebration of the departed. Well done, Television Academy.

I am not sure Donald Glover is the best actor in that bunch. I have that problem with the Comedy category fairly often, however.

Whatever points the Academy got for not going with Jeffrey Tambor again (I get really tired of Emmy repeats and threepeats and fourpeats...) they lost with this one. Don't get me wrong -- I love Julia Louis-Dreyfus. But she's been honored PLENTY. And then some. Let's not always see the same hands. I guess she can only win one more for Veep, anyway.

Can't argue with that!

I sometimes kvetch about movie stars winning Emmys when they do TV, but Kidman absolutely deserves this. No kvetch.

Not gonna lie -- very happy about this. Sterling K. Brown has been outstanding on This Is Us, elevating everyone around him. Extra credit for a wonderful acceptance speech, mentioning Andre Braugher, Bryan Cranston and Jon Hamm and their indelible characters from shows past.

Not a surprise. And she knows who Dick Whitman is, too.

All in all, I would say that was a spiffy show. Mostly the winners were fine by me, Rachel Bloom was fun, the Westworld robot bit was nicely done, it all moved well and I enjoyed seeing Carol Burnett, Norman Lear and Oprah. In a year when we lost TV royalty like Mary Tyler Moore, I'm glad to touch base with those three. And Margaret Atwood!