Shepard's LIE OF THE MIND Opens Tomorrow at ISU 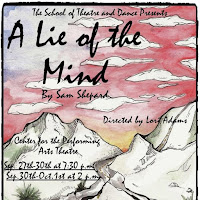 When playwright Sam Shepard passed away in July, Illinois State University theatre professor Lori Adams decided it would be an appropriate memorial to direct one of his plays as part of the fall ISU season. Adams chose A Lie of the Mind, one of Shepard's best.

Shepard specialized in family drama threaded with dark, cynical humor, and that is certainly true of A Lie of the Mind. The play involves two families linked by a dysfunctional marriage and defined by a history of violence.

There's Jake, a man so consumed by jealousy and rage that he lashes out with his fists, and his wife, Beth, the person he lashes at. When the play opens, Jake has beaten Beth so badly he isn't sure if she's alive or dead. She is alive, but she has serious brain damage. By the end of the play, the reverberations of Jake's violence split the families and their secrets wide open.

On Beth's side, we see her father, Baylor, mother Meg, and brother Mike. They are ill-equipped to deal with her condition, with very few emotional tools of their own, except, of course, rage. Her dad also has a gun and he really likes to shoot things. Jake's side isn't any better -- he has a smothering mother, Lorraine, a sister, Sally, hiding family secrets, and a brother, Frankie, who has a kinder nature than the other toxic men in the play, but also a bad habit of being in the wrong place at the wrong time.

On the production side, Emily Kinasz is costume designer, Kayla Brown has lights, Morgan Hunter is in charge of sound, and Nick Kilgore and John Stark were listed as co-scenic designers.

A Lie of the Mind officially opens at the ISU Center for the Performing Arts at 7:30 pm tomorrow night, with performances continuing through a 2 pm matinee on October 1. For tickets or information, contact the CPA box office at 309-438-2535 between 11 am and 5 pm Monday through Friday.

If you'd like to see a sneak peek, the cast will also offer a short scene from their production on the ISU Quad as part of the SEVEN kickoff program. SEVEN is a wellness campaign bringing together a variety of campus groups and resources, including the College of Fine Arts. As their contribution, actors from A Lie of the Mind will perform a short "teaser" scene at Schroeder Plaza on the Quad sometime between 11 am and noon, while other SEVEN activities are taking place. For more information on the SEVEN kickoff, click here.
Posted by JulieK at 12:54 PM

Email ThisBlogThis!Share to TwitterShare to FacebookShare to Pinterest
Labels: A Lie of the Mind, ISU School of Theatre and Dance, Lori Adams, Sam Shepard