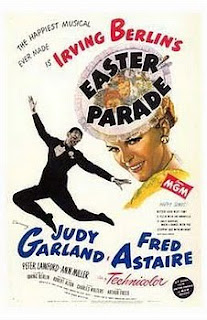 So far, I like April a lot. Yes, I've been crazy busy, but the weather has been awesome and there's plenty of good entertainment happening all over Central Illinois. What's not to like?

Before it's too late to tell you about "Easter Parade" at the Normal Theater – one last screening tonight -- let me get that in. It’s Fred Astaire. It’s a no-brainer. It may not be my favorite Fred – I don’t think he has great chemistry with Judy Garland and he wasn’t meant to play a hobo (“Just a Couple of Swells”) – but it also has a dandy Irving Berlin score, including “Steppin’ Out With My Baby,” and it doesn’t get much better than that particular song and dance. Look for "Easter Parade" tonight at 7 at the Normal Theater.

Leonard Bernstein’s “Candide,” based on the novella by Voltaire about a naïve young man who goes looking for the best of all possible worlds, plays at ISU’s Center for the Performing Arts through April 11th. This “Candide” is best known for its its gorgeous music, but I am also fond of the story, echoing Voltaire’s original with its picaresque plot and sarcastic tone.

“He and She,” a 1911 play by Bloomington’s own Rachel Crothers, continues at U of I’s Krannert Center through the 11th. I saw it and reviewed it for the Champaign News-Gazette, and I definitely think it should be of interest to all of us who work in theater in this area, not only because we rarely get to see Crothers’ work (she was one of the founders of Community Players and supposedly wrote “Susan and God” as a comment on Bloomington’s Julia Scott Vrooman of Vrooman Mansion fame) but also because it’s fascinating to see that women were grappling with career vs. family issues even in 1911. “He and She” was guest-directed for U of I's Deparment of Theatre by Deb Alley, Associate Professor of Theatre at ISU and Artistic Director of the Illinois Shakespeare Festival.

After all the Sondheim parties in March, Illinois Wesleyan is bringing a little more Sondheim to Bloomington-Normal, with a production of “Passion,” one of his more controversial pieces, opening April 6th at McPherson Theatre. Like “Candide,” the music is beautiful. But the book... It’s about Fosca, a woman who lives under a dark cloud of moodiness and distress. She develops a major crush on Giorgio, a handsome soldier, even though he is already attached to the lovely Clara. Can Fosca convince Giorgio that her passion is so great it must be returned? Or will he see her as the nutball stalker she really is? (That last bit is my editorial comment, not really part of the show.) If you want to form your own opinion, and I hope you do, “Passion” plays at ISU for six performances only. I suggest you see it and come back here to argue about it with me. Is Fosca a stalker? Or is what she feels for Giorgio true love? Is Fosca impossibly self-indulgent? Or are her feelings just deeper than anybody else’s? See what you think.

On April 8, a company called DanceBrazil (billed as “direct from Salvador”) will take the stage at the Bloomington Center for the Performing Arts. BCPA describes the show this way: “The richly colorful music and costumes, samba-inspired dance, and whiplash movement of capoeira - that is the glory of DanceBrazil.” For tickets or for more information please visit the website or call the BCPA at 309-434-2787.

Also coming up this month, the Bloomington and Normal Public Libraries team up for their annual Community Reading Program called “A Tale for Two Cities.” This year, participants will be reading Warren St. John’s "Outcasts United: An American Town, a Refugee Team, and One Woman's Quest to Make a Difference." St. John will also speak at the Bloomington-Normal Marriott Hotel & Conference Center in Uptown Normal on April 12 from 7 to 9:30 p.m.

In addition to “Candide” above, ISU is also tacking “Macbeth” in April, with five performances at Westhoff Theatre from the 14th to the 18th. It makes a nice contrast to the lighter fare planned for this summer’s Shakespeare Festival, and it’s always intriguing to see what college-age actors can do with complicated characters like Mr. and Mrs. Macbeth. Ambition, murder, sleepwalking, guilt and tragedy – who can resist?

A “don’t miss” has to be Heartland Theatre’s production of Horton Foote’s “The Trip to Bountiful,” directed by Sandi Zielinski, opening April 15th and playing until May 2nd. Geraldine Page won an Oscar for her performance in the 1985 film version, playing Carrie Watts, an elderly woman stuck in 1940s Houston with her overly protective son and his overly controlling wife. Carrie is desperate to return home to Bountiful, the small Texas town where she grew up. Can Carrie stage a successful escape and find her way back home?

The Normal Theater will be offering “The Last Station,” later this month. Christopher Plummer and Helen Mirren both received Oscar nods this year for their roles as Leo Tolstoy and his wife, trying to balance the ideals that permeate his work against fame and wealth. “The Last Station” plays April 22-25.

If you like the Flying Karamazov Brothers, they will take their crazy antics to the Bloomington CPA for one performance on April 24th. I’ve seen them perform, and their juggling and comedy is really quite astonishing. This show features two of their favorite tricks: “The Danger Trick,” where the brothers pretend to cook a meal and drink champagne while continuing to juggle, and “The Gamble,” where they will juggle items offered by the audience. FMI visit the website linked at left or call the BCPA at 309-434-2787.

Those are my highlights for April. Let me know if there’s something you’re really looking forward to that I missed.
Posted by JulieK at 1:00 PM