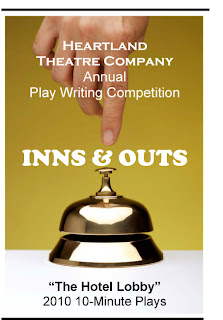 This year's theme is the Hotel Lobby: Inns & Outs, and there are lots of roles for lots of different ages. Auditions will be held at Heartland Theatre, Lincoln & Beech Streets, in the Normal Community Activity Center.

Wondering about the winning plays? Here they are:

Civil Disobedience, by Bara Swain (NY)
How far would you go to make your son listen to you? Goldalee Schneider may be forced to resort to a sit-in strike in the Holiday Inn Express NYC.
1 M, 1 F

Ursula Fernhouse Checks Out, by Michael R. McGuire (CT)
Night clerk Rita isn’t sure what to make of an unlikely hit man with a fear of heights gunning for a guest who's been there since 1962. But, hey, at least it’s different.
1 M, 2 F

Not in My Lobby, You Don't, by Corey Case (IL)
An uptight clerk has issues with a member of a punk-rock group trying to check out. Wild party, naked groupies, sofa in the pool... That’s rock and roll, baby!
3 M, 1 F

Almost There, by Philip Kaplan (NY)
Stuart has a vivid virtual life, visiting a baptism, a bachelor party and a funeral without leaving the lobby. Cynthia wants to sit in peace to wait for her date. Whose lobby is it, anyway?
1 M, 1 F

Going Nowhere, by R.D. Wakeman (CA)
A jaded front desk clerk and a new maid ponder moving up from their jobs, while on the other side of the lobby, a couple tries to decide whether their affair is going anywhere.
1 M, 3 F

If Only, by Dave Krostal (IL)
When a down-on-his-luck man takes refuge from the rain, he offers a game or two of Go Fish and a gift of a snow globe to the desk clerk, someone he thinks he knows from long ago.
2 M

Coffee and a Cruller, by Rachel Stanford (IL)
Mmmm... Free breakfast at a small-town motel. It's worth getting up at 4 a.m. for two gossipy ladies trying to be helpful to anybody crazy enough to actually pay for their own doughnut.
1 M, 3 F

Driving Through the Fog, by Elena Naskova (WA)
Low-rent Motel 90 isn't exactly where Helen sees herself hanging out. But she's stuck there when heavy fog sets in, negotiating with a desk clerk whose life is even foggier than hers.
1 M, 1 F