"A Little Night Music": Could I Get Mine More Swirly, Please? 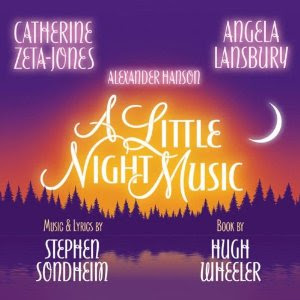 "A Little Night Music," the Stephen Sondheim/Hugh Wheeler musical, is based on an Ingmar Bergman movie called "Smiles of a Summer Night," or "Sommarnattens Leende" to Mr. Bergman. Bergman’s title is reflected in Wheeler’s script, when a wise old woman tells her granddaughter that, if she knows where to look, she may see three smiles appearing in the summer night sky. “The first smile smiles at the young, who know nothing. The second, at the fools who know too little. And the third at the old who know too much.”

Those “smiles” are part of what makes “A Little Night Music” linger in the memory. It is, at its heart, about life and death and love and regret and being foolish, but also about seeing smiles in the summer night. How cool is that?

When Wheeler and Sondheim adapted “Smiles of a Summer Night,” they kept the same cast of characters and the same basic story, about a group of mismatched lovers caught under the spell of Sweden’s strange Midsummer night, when the sun never quite sets, when everything shimmers with the glow of endless twilight, when the wrong people keep chasing you no matter how hard you run after someone else, when the one you want seems within reach for a moment, but then isn’t quite.

I love the film, but this is definitely a case where musicalizing the material added something special. Sondheim's score, including "Send in the Clowns," his most popular stand-alone song, is simply magical. It's swirly and mysterious, funny and sad, romantic and cynical, all at once. The waltz-time used in most of the score helps keep the magical mood spinning, and some productions, like the London one directed by Sean Mathias, with Dame Judi Dench as leading lady Desirée Armfeldt, extend the swirly feeling into the staging. That one made liberal use of the gigantic drum revolve in the National’s Olivier Theatre, which meant that much of the cast entered already revolving, and they kept on whirling and twirling throughout. It was lovely.

The current Broadway production directed by Trevor Nunn is remarkably swirl-free. More’s the pity. There is dancing, choreographed by Lynne Page, and that helps, but it’s not really enough. This “Night Music” is set on a pretty straightforward set, designed by David Farley, that gives us drawing room walls bounding the action in Act I and some birch trees clustered at the back in Act II. It feels a little claustrophobic, to be perfectly honest, although there are some fetching stage pictures when the performers are hazily reflected in murky mirrored panels.

Mostly, Nunn’s staging inside the Walter Kerr Theatre makes the production seem pared-down and spartan, and that extends to the tiny orchestra. Musical director Tom Murray makes the most of what he has, but it still seems stingy of Nunn to use so few musicians for this particular show.

I wouldn’t call Catherine Zeta-Jones’ performance stingy, however. Her Desirée is very pretty – I kept thinking she looked like Vivien Leigh – but also a little cheap and coarse. She punches her lines into submission with a pesky energy and muscular rhythm that makes the character move but doesn’t give her any substance. It’s also very much at odds with the portrayal of her mother, the formidable Madame Armfeldt, turned in by the legendary Angela Lansbury, who takes each line, each bon mot, each flicker of an eyelash, and makes it live and breathe. Like the music in “A Little Night Music,” Lansbury is simply magical.

Dressed and made-up as a painted lady of days gone by, Lansbury manages to soften her gorgon patina into something much more real, making her “Liaisons” quite affecting and showing exactly why she is a legend.

Lansbury also shows excellent chemistry with Keaton Whittaker, the young actress playing Desirée’s daughter Fredrika in the performance I saw. Whittaker definitely fell on Lansbury’s side of the divide running down the middle of this production, with some on the skinny side (Zeta-Jones; Alexander Hanson as a handsome but unsubstantial Fredrik, Desirée’s once and future love; Aaron Lazar not really going anywhere with ridiculous Carl-Magnus, a puffed-up military man who won’t take no for an answer; and Ramona Mallory making Anne, Fredrik’s teenage wife, always a bit of a ninny, into a full-fledged fool with no hint of a there there) and some offering genuine, fully-rounded, compelling characters who really sold the delicious material (Lansbury and Whittaker; Hunter Ryan Herdlicka’s coltish take on moody Henrik, Fredrick’s son who yearns for his stepmother; and Leigh Ann Larkin, who makes Petra, the maid, a lot more interesting than she usually is.)

They all sing well, so there is that, although Zeta-Jones’ big number, “Send in the Clowns,” came off a little more yippy and twitchy than it needed to be. Not sure what was going on there, but she never seemed to relax into the song or fully explore what is really going on there. (I saw this show on the first night I was in New York, while Barbara Cook’s take on “Send in Clowns” came on my last night. Night and day. Night and day. But I didn’t have Cook’s version to compare Zeta-Jones’ to when I first saw it, and I still thought it was uneasy and weird the way she kept flicking her head around after every line, as if she were distracted by something over our heads. Very strange. So rest assured that the fact that I didn’t like Zeta-Jones’ “Send in the Clowns” had nothing to do with Cook’s master class a few days later.)

“Now/Later/Soon,” the trio sung by Fredrik, Henrik and Anne to express the different places they’re in, was a highlight of the production, and I also enjoyed Larkin’s performance of “The Miller’s Son,” wherein Petra ruminates on her romantic future. It was both more fun and more sympathetic than that song usually is.

And in the end, it’s still “A Little Night Music.” The music is gorgeous, the story is irresistible, and Angela Lansbury alone is worth the price of admission.
Posted by JulieK at 11:05 AM