"Sondheim on Sondheim" Is Simply Sublime 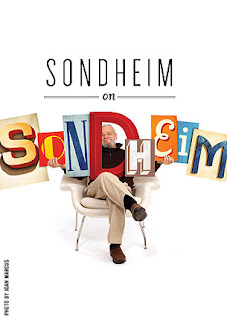 There’s something about story and characters that suck me in. That’s why I generally prefer book musicals to revues, so that the songs spring from character and further the plot. Well, in a good show, anyway.

Stephen Sondheim is known for being really, really good at that, so that his songs don’t just pop up out of nowhere, but are positioned at those moments when characters are moving from A to B, when they tell us (and figure out for themselves) by way of the song how they’re making that emotional journey.

Given the cast (including Barbara Cook, Vanessa Williams and Norm Lewis), I was pretty sure I would enjoy “Sondheim on Sondheim,” a new revue combining Sondheim songs with interviews and images of the man himself, conceived and directed by frequent Sondheim collaborator James Lapine. But I expected it to be the usual pleasant Sondheim revue experience, where I hope to hear my favorites and enjoy the performances, and come away making mental cast lists for the absolute perfect fantasy productions of “Follies” or “Merrily We Roll Along.”

That’s why “Sondheim on Sondheim” is so astonishing. Because it doesn’t really have a book, but it feels like it does. Because the one character – Stephen Sondheim – and his filmed recollections and musings about his life and his songs and his process – not chronological or neat, sometimes silly, sometimes off-topic completely – are ultimately moving and profound. I felt this show in my heart. Two weeks later, I’m still feeling it.

Set designer Beowulf Boritt, lighting designer Ken Billington and video/projection designer Peter Flaherty have created a simple playing space that somehow manages to look spiffy and cool as it showcases the singers in various combinations and permutations. Flaherty’s contribution – the interviews and images – are especially significant, projected on a scattering of plasma screens in different sizes, cocked at different angles around the stage. We see Sondheim at home, slouching on his sofa, writing, not writing, fixing himself a drink, puttering around. All of that is fascinating, as is the oft-repeated information about Oscar Hammerstein as his mentor and surrogate father and his difficult relationship with his mother. Still, it doesn’t sound on paper like it would add up to much. And yet it does.

After a series of sublime performances (there’s sublime again – it keeps coming to mind with regard to this show) and the emotional punch of the interviews, I felt moved, affected, enraptured. I wanted to see it again and take notes this time, yet not take notes, because then I would have to take my eyes off the stage and how could I possibly do that? During the show, there were moments when I didn’t even want to applaud because I was afraid I might miss a syllable at the beginning of the next video.

By the end, I felt I knew the elusive Sondheim better, that I had experienced the gold standard when it came to interpretations of some of my favorite songs, and that I was damn lucky to get to see this kind of once-in-a-lifetime performance. What future production of this revue can possibly compare with Barbara Cook, Vanessa Williams, Norm Lewis and Tom Wopat? Or find younger performers like Leslie Kritzer, Euan Morton, Erin Mackey and Matthew Scott? Or even make the video work on that scale?

According to the program, there are about 40 songs performed at least partially in this show, with some unfamiliar choices offered among them. Some of the most interesting sequences are those where Sondheim talks about songs that didn’t work, and then we see, for example, “Invocation/Forget War” and “Love Is in the Air,” the songs he wrote to open “A Funny Thing Happened on the Way to the Forum” but abandoned in favor of “Comedy Tonight.” Back-to-back-to-back, we understand exactly why “Comedy Tonight” ended up opening the show, while the others were discarded.

The other sequence like that, where we see the various songs he wrote to try to end “Company,” is even more powerful, with “Multitudes of Amys” giving way to “Happily Ever After,” and then Norm Lewis bringing down the house with an absolutely blazing, brilliant performance of “Being Alive.” Wow. I thought I’d seen good “Being Alives” before – it’s such a powerhouse of a song, anyway – but Norm Lewis took it to new heights. Just... Wow.

I enjoyed getting another chance to hear “The Best Thing That Ever Has Happened,” a swoony, romantic song for a straight couple when the show was called “Bounce,” switched to the gay couple by the time it was “Road Show.” We see both couples on that, with even more pairings (and I believe one threesome) delivering “Happiness” from “Passion.” “Best Thing” and “Happiness” may be the most romantic pieces Sondheim has ever written, and both of them get excellent performances here from the entire company. Cheeky and a tad cynical, yes, given all the changing partners on “Happiness,” but that fits Sondheim, too.

I absolutely adored the Act I closer, uniting three of Sondheim’s best Act I finales, “Ever After” from “Into the Woods,” “A Weekend in the Country” from “A Little Night Music,” and finally, “Sunday” from “Sunday in the Park with George,” to stunning effect. The video trees and their bright leaves send us into the woods, change color in the country and then fall away on Sunday, as the voices swell on that gorgeous music... Amazing.

All by herself, just sitting there and singing without histrionics, Barbara Cook contributes versions of “Send in the Clowns” and “In Buddy’s Eyes” that will break your heart. Her phrasing and interpretation are simply beautiful.

But my favorite moment is the Cook-and-Williams duet on “Losing My Mind” and “Not a Day Goes By.” Again, they didn’t go for vocal gymnastics or showboating. They just sang. Two singers with fabulous voices and interpretive skills, sharing their talent and their hearts with us. And it is sublime.

For more information or to order tickets, visit the Roundabout Theatre website. Do it!
Posted by JulieK at 10:40 AM