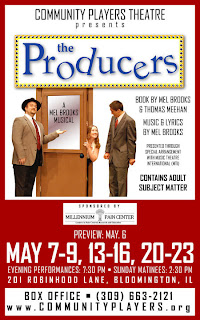 Yes, it's true. It's already May, the students are beginning to pack up and leave for the summer, and fans of the arts have begun to plot out their summer schedules.

Not so fast! There's plenty to do in May, too.

First off, Heartland Theatre opens New Plays from the Heartland* this week, where three one-acts chosen from submissions from all over the Midwest are performed as staged readings on Heartland's stage. This year, playwright Phil Olsen, whose play "A Small Family Gathering" was performed at Heartland last fall, chose the winners on the theme Anniversaries. The three winning plays are:

• “A Good Man,” by Robert Lynn of Dubuque, Iowa, about a mother and her daughters confronting their conflicting memories of the husband and father they lost 30 years ago.
• “Night Time Illumination,” by John Lordan of Evanston, IL, which deals with a young man about to set off into the world and the connection he’s shared with his neighbor.
• “La Cueca Sola,” by Jessica Wisniewski of Romeoville, Illinois, about an army wife longing to share just one anniversary with her faraway husband.

Staged readings of the New Plays from the Heartland, directed by Heartland’s Managing Artistic Director Mike Dobbins, will take place May 7 and 8 at 7:30 pm. Heartland Theatre requests a $5 donation for the event. Playwright/judge Phil Olsen is offering a lecture open to the public and the winning playwrights at the theater on May 6th, also at 7:30.

*Full disclosure: I am appearing in two of the plays.

Community Players pulls out the big guns for its May offering, with “The Producers,” the hugely successful musical based on Mel Brooks’ movie about a shady producer and a schlemiel of an accountant who cook the books to put on a Broadway show. Brooks collaborated on the book and wrote the music and lyrics for this version, too, and you will recognize “Springtime for Hitler” among other hilarious songs. “The Producers” plays at Community Players May 7-9, 13-16 and 20-23, with evening performances at 7:30 and Sunday matinees at 2:30. Brian Artman and Sean Stevens play Max Bialystock and Leo Bloom, the roles made famous by Zero Mostel and Gene Wilder in 1968 and Nathan Lane and Matthew Broderick in 2000, and the lovely and charming Joel Shoemaker and Rosemary Luitjens also appear (as "common law assistant" Carmen Ghia and "Hold Me, Touch Me," a source of cash for Mr. Bialystock, respectively), making "The Producers" a don't-miss.

Illinois Wesleyan closes out its season with “Freakshow,” by Carson Kreitzer, a provocative piece about a strange carnival where the Dog Faced Woman, The Pinhead, Aquaboy, a jaded Ringmaster and a Woman With No Arms and No Legs try to find their way in a new world.. Directed by Britnee Ruscitti, “Freakshow” plays in the E. Melba Kirkpatrick Labratory Theatre May 21 and 22 at 8 pm and May 23 at 2 pm.

One of my favorite old musicals, “Footlight Parade,” with Jimmy Cagney hoofing it up on Broadway, hits the Normal Theater May 20th and 21st, and then – mark your calendars – Fred Astaire comes to town in “Top Hat,” one of the best of the Fred-and-Ginger La Belle, La Perfectly Swell Romances, on the 22nd and 23rd.

Over in Urbana, “Always Patsy Cline” continues at the Station Theater through May 8, and Krannert Center at U of I features a full roster of musical events, like Krannert Uncorked on May 6, 13 and 21.

I’m also intrigued by Student Playwrights Outreach Theatre, called SPOT for short, a collaborative effort between the University of Illinois Department of Theatre and Booker T. Washington Elementary School. Each year, fourth- and fifth-grade students write stories that the SPOT team adapts into short plays. In its Krannert Center debut, the show features stories about superheroes, family pets, and the occasional new pair of boots. SPOT plays at Krannert’s Studio Theatre for one performance only, at 7 pm on May 13.
Posted by JulieK at 11:41 AM