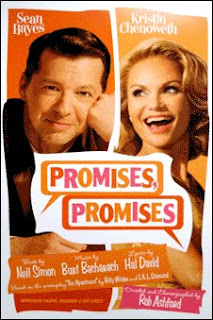 "Mad Men" viewers have long wondered why Peggy Olson – a nice Roman Catholic girl from Brooklyn – has that name. Is she named after Ann-Margret, whose real name was Ann Margret Olsson? Or Mrs. Olson, the coffee queen in all those old Folgers commercials?

After seeing "Promises, Promises" on Broadway, I think I have an answer. Yep. There's a Peggy Olson in "Promises, Promises." The Miss Olsen (with an "e") in "The Apartment," the Billy Wilder/I.A.L. Diamond movie "Promises, Promises" is based on, is the secretary and former girlfriend of big bad boss Jeff Sheldrake. Played by the lovely Edie Adams in pointy white cat glasses, Miss Olsen is both a plot device (she's the one who clues in Fran Kubelik that their boss is a serial cheater and a heel) and a symbol of how poorly women are treated in this 60s Gray Flannel World (where all the execs are cheating dogs and all the women either put up with it or lose their jobs.) In "Promises, Promises," she is not just Miss Olsen, but Peggy Olson, sharing her name with the Peggy Olson in "Mad Men" who started out a secretary for the dashing, cheating boss, but turned out to be a smart girl with a talent for advertising.

Edie Adams is adorable in the movie, it stinks that we don’t find out if she gets another job or moves on, and I think I'm going to imagine Peggy in "Mad Men" as Edie Adams' revenge.

Like "Mad Men," "The Apartment" is very cynical about life in the 60s and the accompanying sexual and corporate politics, what with the basic plotline about an everyman office drone named C.C. Baxter (nicknamed Bud in the movie, but Chuck on stage in the musical version) who aspires to rise through the ranks at Consolidated Insurance. The only way for him to do that is to let a fleet of higher-ups use his apartment for their extra-marital trysts. Yes, C.C. is complicit in their dirty deeds, but he's not exactly happy about it. And he also spends a lot of time on park benches in the snow while other people enjoy his apartment, plus the girl he yearns for, an elevator operator named Fran Kubelik (turned into an executive dining room hostess in "Promises, Promises") keeps ignoring his affections.

By turning "The Apartment" into a musical, Neil Simon, Burt Bacharach and Hal David replaced a lot of the black-and-white cynicism with color and fizz, so your line-up of cheating execs now sing and dance about their need to find a place to take their girlfriends for after-work quickies. (If the Peggy Olson/Olsen connection is piece of trivia #1, then piece of trivia #2 is that the creepy execs in "The Apartment" include "My Favorite Martian" Ray Walston, David Lewis, AKA the original Edward Quartermaine on "General Hospital," and David White, who played Larry Tate, Darren's advertising agency boss on "Bewitched.")

"Promises, Promises" tries to keep a close connection to C.C. Baxter through narration spoken directly to the audience, although there's really no way to compete with the close-ups on Jack Lemmon, who was so sympathetic and appealing as C.C. in "The Apartment." Plus some of the movie's best bits, like C.C. straining spaghetti through a tennis racket while singing opera to himself, aren't even attempted on stage. In fact, the lack of apartment time is one of the biggest failings in Neil Simon’s book for "Promises, Promises." We don't get inside the all-important apartment till well into the show, and then it's a fairly skimpy set that doesn't have any of the cozy charm of the one Jack Lemmon made his own on screen.

In general, the mood of "Promises, Promises" is more like "How to Succeed in Business Without Really Trying" than "The Apartment." And there's nothing wrong with that. Burt Bacharach's music is breezy and bright, in a very 60s fashion, with standouts like the title song and "I'll Never Fall in Love Again" keeping you humming long after you leave the theater. I have a particular fondness for "Knowing When to Leave," as well; it appears on a Broadway album released by Liz Callaway, one of my favorite voices.

Simon’s book is fine, if not at the same level as the brilliant Billy Wilder/I.A.L. Diamond version, and the Bacharach/David score is a delight. In general, I don't see any reason why "Promises, Promises" hasn't been revived more often. Maybe because it hit Broadway in 1968, but it has more in common with older shows instead of the "Hairs" and "Oh, Calcuttas" of the late 60s?

But the new "Promises, Promises" has its attractions, not the least of which is Sean Hayes as C.C. Baxter. It's tough to compete with the memory of Jack Lemmon in the role, but Hayes' take on C.C. is different enough to make its mark. This C.C. is as cute and sweet as he needs to be, Hayes sounds fine with the tricky Bacharach songs, and he has a knack for physical comedy that really works, especially in one interaction with a slippery chair and during an extended scene where he runs into Katie Finneran’s woman on the prowl. That last scene deservedly brings down the house. If I lived in New York, I'd go back to see this "Promises, Promises" a few more times just for his winning performance.

Kristin Chenoweth isn't as successful as Fran, but mostly because she seems miscast from the get-go. Chenoweth has a great voice, but not the right voice for this role, even though they’ve added two Bacharach classics (“I Say a Little Prayer” and “A House Is Not a Home”), apparently to give her more to do. The new songs sound good, but don’t fit the book, especially “Prayer.” Chenoweth is also 1) too mature (Trivia bit #3: Shirley MacLaine was 26 when she played Fran; Cheno is 42), 2) too blonde, too orange and too skinny, making Fran look like she ought to be clubbing in Hollywood in 2010, not toiling in the executive dining room at Consolidated Life in 1962 and 3) too self-possessed. There is no way it's believable that this confident, hard-edged Fran would be so despondent after a break-up that she would try to off herself.

I believe it was I.A.L. Diamond, co-writer of “The Apartment” with Billy Wilder, who described Fran as sexy, funny and sad. Kristin Chenoweth can do funny, but the jury is still out on sexy and sad, at least in this production. Shirley MacLaine gave Fran a gamine vulnerability that Chenoweth just can't touch.

She also doesn’t show much chemistry with either Hayes or Tony Goldwyn, who plays Meldrake, her other leading man. I have to say, Goldwyn strikes me as an odd choice for the role, when there are so many other Broadway stars of a certain age who are a closer fit. (Paging Marc Kudisch.) Goldwyn is handsome, but kind of remote, and his singing voice is only okay. (Paging Brian Stokes Mitchell.) All in all, he comes off as a bit of a cold fish and a weasel, instead of the charismatic heel we get from Fred MacMurray in the film. (Paging Gregory Harrison.) Some seductive power and a great deal more warmth would be welcome. (Paging Tom Wopat.)

I’m willing to concede that the lack of spark with Goldwyn isn’t Chenoweth’s fault, but the lack of heat with Hayes surely is, since he and Katie Finneran almost set the stage on fire when they start their crazy second-act tango.

I don’t know any solution to the problem, unless Chenoweth leaves the role and gets replaced by somebody who can project more emotional fragility, something different and quirky enough to appeal to a singular guy like C.C. Baxter. Maybe Katie Finneran can take over the role. Or Elisabeth Moss, who plays Peggy Olson on “Mad Men.”

Some other notes – “Turkey Lurkey Time” is funny, but not exactly a showstopper without Donna McKechnie dancing in the front line; Dick Latessa is wonderful as C.C.’s neighbor, a doctor, and that role adds a lot to the general feel of the show; and Brooks Ashmanskas, Peter Benson, Sean Martin Hingston and Ken Land are pretty darn good at making lecherous businessmen entertaining.

The original “Promises, Promises” played for four years, and it would be nice if this one lasted a while, too. Four years seems impossible on today’s Broadway, so maybe a year or two. I think I’d move it to a different house (the Broadway Theatre is kind of a barn) and replace Chenoweth and Goldwyn, and see if that didn’t warm up the temperature and the box office.

“Promises, Promises” is directed and choreographed by Rob Ashford, with orchestrations by Jonathan Tunick. Scenic design is by Scott Pask, with costumes by Bruce Pask. It plays at the Broadway Theatre and tickets are available at telecharge.com.
Posted by JulieK at 12:48 PM