Footlight Parade and Top Hat at the Normal Theater 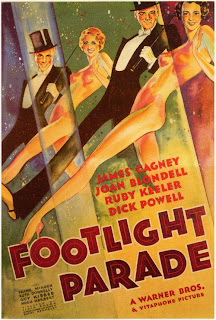 There's only one night left of one of my favorite musical films from the 1930s! If you want to see Jimmy Cagney hoofing it up as he looks high and low for his "Shanghai Lil," you'd better get to the Normal Theater tonight at 7. "Footlight Parade" is one of the classic Warner Brothers backstage musicals, as Jimmy, Joan Blondell, Ruby Keeler and Dick Powell try to put on an impossibly grand Broadway show, complete with on-stage waterfall and a million dancing girls in a big, goofy Busby Berkely-stravaganza.

And then there's Fred Astaire... Okay, Ginger Rogers, too. Fred and Ginger will be dancing "Cheek to Cheek" after Fred puts on his top hat, ties up his white tie and dusts off his tails. "Top Hat" is on the big screen at the Normal Theater Saturday and Sunday nights, again at 7 pm.
Posted by JulieK at 1:20 PM