"Bhopal" Is Dangerous and Beautiful at ISU's Westhoff Theatre 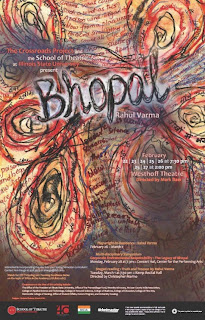 Since the beginning of drama, playwrights have attempted to illuminate and argue political and social issues. Still, it's a tall order. How do you personify and dramatize war, poverty, costly decisions by the powerful and the devastating fallout on the powerless, especially when the devastation is a world away?

Playwright Rahul Varna, born in India but now based in Canada, attempts to bring to life that "world away," taking us to India in 1984, when a dangerously unsafe Union Carbide plant in Bhopal leaked more than 25 tons of toxic chemicals, creating the worst industrial disaster in world history, with thousands of lives lost and countless others (even generations later) gasping for breath.

Varma's script for "Bhopal" focuses on all the rungs on the ladder, from the lowest (a mother and her sick child living in dire poverty) to the highest (a corporate bigwig from the US who flies in to deflect responsibility), showing how much blame there is to pass around, how pretty much everybody involved obfuscated, compromised and lied, bartering long-term well-being for short-term profit. The local leader who tells himself that bowing down to Union Carbide will mean houses and clean water for his people, the mother who plays one side against the other to try to get care for her daughter and a little extra money, the Indian-American boss who toes the company line and turns a blind eye to keep his job safe, the CEO who says he is balancing profit and progress with keeping his shareholders happy – they all have reasons for their ethical lapses. And they're all part of the problem.

Only a Canadian doctor trying to research and quantify why so many mothers and children are sick and dying near the plant long before the disaster has pure motives, and her intractability and bluntness don't get a whole lot of traction with those around her. The message here is that you have to play the game to be heard, and yet if you play the game, you may very well lose your soul. Lose, lose.

Varma doesn't offer answers, but he does pose a lot of stark, unpleasant questions. In ISU's production, performed in the round at Westhoff Theatre, director Mark Baer clearly wants to keep the Indian influence front and center. Uma Kallakuri's choreography and performance as a dancer are striking and beautiful, telling the story around and among the other performers as well as adding a real feel of India.

Baer's cast performs almost completely as an ensemble, but Kallakuri stands out, as does Melisa Pereyra, doing a 180 from her last performance as an Irish barmaid in "The Playboy of the Western World." This time Pereyra takes on an Indian accent and the burden of terrible poverty as Izzat Bai, a woman who has lost everything and yet keeps on losing.

Others of note in the cast include Henry Woronicz, former artistic director at the Oregon Shakespeare Festival who is now the head of the graduate acting program at ISU, polished and scary as Warren Anderson, the big bad from Union Carbide; Kim Pereira as Devraj Sarthi, the top Union Carbide man in Bhopal who pays a steep price for his perfidy; Jessie Dean, lovely and fierce as Madiha, an Indian woman who makes all the wrong choices; Owais Ahmed as a puffed-up Bhopal potentate; and Abby Vombrack, uncompromising and tough as Dr. Labonté, the truth-teller in this sea of lies.

This production of "Bhopal" is part of a larger Crossroads Project series of events that involve playwright Rahul Varma, including a reception at Kemp Recital Hall after the 2 pm performance on February 27, a symposium on "Corporate Environmental Responsibility: The Legacy of Bhopal," on Monday, February 28 at the CPA, a School of Theatre colloquium called "Beyond Color-Blind and Non-Traditional Casting" at 2 pm on March 1 at Westhoff Theatre, a staged reading of Varma's new Iraq War play, "Truth and Treason," directed by Christopher Marino, to be performed at 7:30 pm in Kemp Recital Hall on March 2, and an International Studies Seminar called "Staging Peace in Times of War: The Current State of Political Theatre in Canada" at noon on March 3rd in the 1st floor west lounge of the Bone Student Center.

Since the cast of "Bhopal" is drawn from a variety of ethnicities, that colloquium on color-blind casting may be particularly interesting.

For more information about "Bhopal," Varma and the Crossroads Project, click here or here.

Tickets
Posted by JulieK at 2:33 PM