It's always fascinating how many different meanings one word can have. "Proof," the title of the David Auburn play opening tonight at Heartland Theatre, is one of those words. Aside from being the title of a Tony and Pulitzer Prize winning play, "Proof" can also refer to evidence in court, how strong liquor is, the rising of dough, coins struck for collectors, pages used in the editing phases of printed material, a step-by-step way to demonstrate the truth of a mathematical theory or just how one person convinces another person that they are telling the truth.

Those last two are the big proofs in the play called "Proof." Auburn's central character, a 25-year-old woman named Catherine, has been involved in math her entire life as the daughter of a brilliant mathematician. But her father had serious mental problems that began to surface at just about the age of 25. Catherine is pretty sure she has inherited some of her father's astonishing proficiency with math. But what about his mental illness? 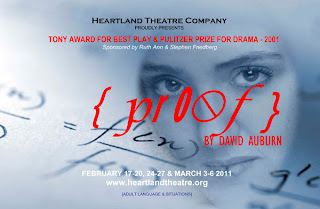 As Auburn tells his story, Catherine struggles with how to prove that she knows her way around a proof at the same time she needs the people around her – her older, more practical sister; a new man in her life who was a student of her father's; and even the ghost of her father himself – to prove that their motives are pure, that they believe her, that she isn't losing her mind.

I'm not enough of a mathematician to know if any of the math background works (but I see in the program that Heartland will be providing a math expert, ISU Professor Emeritus Stephen Friedberg, as part of the panel discussion after the matinee performance on February 27th, so you may want to show up for that if the math in the play either intrigues or annoys you.) I don't think that matters. It's clear Auburn has set up a dramatic dilemma that works for audiences. After all, it's pretty darn normal for people to want validation, trust, respect and belief in their lives. And that's really all Catherine is asking for.

Cyndee Brown directs for Heartland Theatre Company with an eye on the emotional truth in the relationships. At the heart of the play, Gwen de Veer does lovely work as Catherine, the woman whose depression is masking the vital person underneath. De Veer has excellent chemistry with all three of her scene partners, so that Catherine and her dad (played by Dean Brown) seem to have the real affection of family members, Catherine and her sister Claire (played by Christine Cummings) show the familiarity and old wounds that sisters often do, and Catherine and Hal, the guy she's interested in, (played by John Bowen) have the right spark of flirtation and possibility.

One of the strengths in Auburn's script and in these performances is that none of the characters are completely wrong or right. Brown's take on Robert, the dad, shows how sweet he can be, as well as how scary, when his character's mental health goes off the rails, while Cummings isn't afraid to make Claire unpleasant. But when we see in flashbacks the special relationship Catherine and her father share, it's clear how much of an outsider Claire has always been and just why she would be as prickly as she is.

I especially liked John Bowen's work as Hal, the grad student who catches Catherine's eye. Bowen's Hal is believable as someone who is smart, a little awkward, and yet confident in his own nerdy appeal. He makes us root for these two crazy kids, even after they both make missteps.

Michael Pullin's warm brick-and-mortar set, with just a few scattered leaves to clue us in to the September timeframe, hits the target nicely, and Gail Dobbins' costumes look spot-on for these people in this place.

I've seen "Proof" on Broadway as well as in a more intimate setting before this, and I have to say, this is a play that works best when scaled down a bit. It's as if the truth, the proof, of the human heart plays best when you can see it close up.