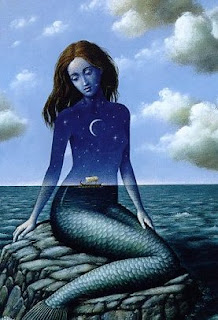 Last April, I decided that Deborah Zoe Laufer's "Sirens" was my favorite from the 2010 Humana Festival of New American Plays at Actors Theatre of Louisville.

I liked the play''s imagination, spirit of fun and sense of mischief, as well as its link of new (like Facebook) to then (like Greek mythology.) So I made the trek down to St. Louis yesterday to see how "Sirens" would translate to a smaller space like the New Jewish Theatre's beautiful little Wool Studio Theatre.

Director Tom Martin stages the show in the round, with a simple, bright blue playing space and pieces of scenery and props that move on and off quickly and effectively, plus he uses Matthew Callahan's musical compositions, the ones created for the Humana production, and that's a smart choice, too. Still, I wish he'd used more of the music to accompany scene changes, since listening for the next one was such a treat in Louisville.

With Martin at the helm, the humor in this comedy about a long-married couple named Sam and Rose, trying to revive their youth with an anniversary cruise of the Greek isles, works nicely. Laufer's script is just zany enough to keep the laughs coming, and it's nice to see that communicates just as well in St. Louis as it did in Louisville.

Martin's cast, with Kari Ely as Rose, Bobby Miller as Sam, Leah Berry as the Siren and John Kinney as Richard Miller, a man from Rose's past, makes the characters look very different from the original production, and I'm not sure that's a good thing. It always strikes me as somewhat unhelpful to make that kind of comparison -- actors can't really try to be like other people, after all -- but in this case, it's hard not to notice that Ely's Rose is awfully strident and not very warm, Miller's Sam is too much of a sad sack, Berry's Siren tips over into fierce, wild warrior goddess territory when she should be seductive and lovely, and Kinney's Richard Miller, while funny, comes off a little too slimy. They're also dialing their performances to 11, when that seems much too big in such a small space. My guess is that Martin has directed them to go big to get the laughs, and that's certainly his prerogative, even if I think it makes the play feel less special, less magical.

For tickets or more information, click here.
Posted by JulieK at 2:17 PM