Terry Kinney and Jeff Perry Come Back to Discuss "From Allen Theatre to Steppenwolf: Stories of American Theatre" 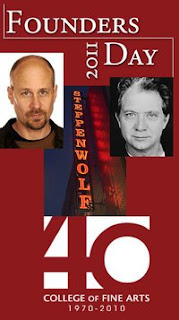 Once upon a time, I competed in IHSA speech competitions. I was pretty good in prose reading, and I made it to state as a sophomore. (This was very exciting in 1972.) I kept my program from the state event -- or rather, my mother kept it, along with a box of my high school memorabilia -- and I happened to page through that little paper program, just for kicks, quite a few years ago, when the memorabilia box was returned to me.

I was shocked to discover that future Steppenwolf Theatre Company stars John Malkovich, Gary Sinise, Jeff Perry and Terry Kinney were all there, at that same competition. If memory serves, Sinise and Perry were part of the contest play cast from Highland Park High School ("Under Milkwood," I think) and Malkovich and Kinney competed in Individual Events for Benton and Lincoln High Schools, respectively. It's a weird little one-degree-of-separation footnote, since I have no specific memory of meeting any of them, and I doubt they even knew each other then. Well, Sinise and Perry knew each other, obviously, being from the same high school and all. I do remember being very unhappy that their lovely "Under Milkwood" didn't win the play competition that year.

So it definitely caught my eye that Perry and Kinney, two of the four who made it to State in 1972 and two of Steppenwolf's three founders (Sinise is the other one), are coming to ISU for special Founders Day celebrations. Jeff Perry and Terry Kinney will be appearing as part of a panel discussion called "From Allen Theatre to Steppenwolf: Stories of American Theatre," set for Braden Auditorium on Thursday, February 17th, from 11 am to noon. They'll talk about "the Illinois State University connection, Steppenwolf's growth to international acclaim, and the state of theatre in America today."

This is a free event, open to the public. Don LaCasse will moderate, and we are assured there will be plenty of time for audience questions. You'll find more information here, with some details about the Illinois State University Founders Day Convocation occurring later that day, which will also involve Kinney and Perry.

I didn't attend ISU, so, as far as I know, this will be the first time that Terry Kinney, Jeff Perry and I are all in Bloomington-Normal at the same precise moment since 1972. I doubt they'll be paying attention, but I will. Maybe there will be a program I can add to the Memento Box!
Posted by JulieK at 4:15 PM