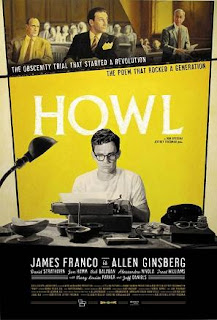 It's started out crazy, anyway! Whether you're calling it a Snowpocalypse, Snowmageddon, Snowtorious B.I.G. (my cat likes this one), SnOMG, Snowzilla, Blizzardapalooza or just A Big Pain, the snowstorm that started yesterday has canceled a whole lot of things. That means that some of the openings and events I'm going to list here may or may not be postponed or moved or canceled, depending on when the performers and artists can get where they need to be, whether it's safe for audiences to try to get there, too, and whose power is out where.

This week, we're supposed to be getting "Howl," a movie about poet Allen Ginsburg and his 1957 obscenity trial, at the Normal Theater. Current Hollywood "It Boy" James Franco plays Ginsburg, while the very handsome Jon Hamm plays his very handsome defense attorney Jake Ehrlich and David Strathairn plays Ralph McIntosh, the prosecutor who put Ginsburg and his poetry on trial. "Howl" is scheduled to be on the Normal Theater's screen Thursday the 3rd through Sunday the 6th. Let's hope we're all shoveled out in plenty of time to see "Howl."

At the moment, U of I's Krannert Center says that tomorrow night's opening night of "The African Company Presents Richard III" will go on as scheduled, although tonight's open dress rehearsal is canceled. "The African Company," a play by Carlyle Brown, shows us a battle over who has the right to present a Shakespeare play, but also who has the right to aspire to theatrical and artistic expression. In the play, an all-black acting company in 1821 New York City works very hard to put on "Richard III," and their production proves to be very popular. But that doesn't sit well with a white company that's also putting on "Richard III." Who will prevail when push comes to shove, when the uptown impresario pulls out all the stops to get rid of the competition? Robert Ramirez directs at the Studio Theater at U of I's Krannert Center for the Performing Arts.

Champaign's Art Theater says it's showing "I Love You, Phillip Morris," the zany comedy about a con man, starring Jim Carey and Ewan McGregor, tonight and tomorrow night at 7:30 pm. After that, Mike Leigh's "Another Year," which stars one of my favorite actors, Jim Broadbent, opens on the 4th and sticks around at least through the 10th. "Another Year" has gotten rave reviews and earned an Oscar nomination for its screenplay, so if you're an Academy Awards completist, you'll want to check this one off your list while you can.

Wednesday, February 9th, the work of local poet Barbie Dockstader-Angell will be performed by actresses Irene Taylor, Jennifer Rusk and Bridgette Richard in a show called "And She Said." This show, a production of New Route Theater and its 2011 "One Shot Deal" series, will take place at Eaton Studio & Gallery in Bloomington at 7 pm on the 9th. Phil Shaw directs. For more information about the show, visit this page.

Sarah Ruhl's "Eurydice" is the next show in Urbana's Station Theater's ambitious season, running February 10-26. In Ruhl's usual expressionistic, free-form style, "Eurydice" offers a different take on the mythical tale of a new bride carried off to the Underworld and the grief-stricken groom who tries to get her back. Ruhl focuses more on the girl and what she wants, which is a little different from the original myth. Mathew Green directs "Eurydice" for the Station.

Events scheduled for the Bloomington Center for the Performing Arts this week, like "An Evening with Naturally 7" and the Ahn Trio, will definitely be postponed, but you can still look for an acoustic evening with Lyle Lovett and John Hiatt on the 10th. 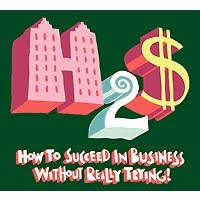 Also on the 10th, ISU offers "How to Succeed in Business Without Really Trying," (short form: H2$), the high-energy musical about an ambitious window washer named J. Pierrepont Finch and his rise to success at the World Wide Wicket Company. First there was a how-to book by Shepherd Mead, then the Broadway show (music and lyrics by Frank Loesser, book by Abe Burrows, Jack Weinstock and Willie Gilbert), and then a movie. The adorable Robert Morse played Ponty both on Broadway and on film, with Matthew Broderick taking on the role in a 1995 Broadway revival. Harry Potter himself, Daniel Radcliffe, will be the corporate climber in a new production opening at New York's Al Hirschfeld Theatre with previews beginning February 26th. You are invited to see how ISU does "H2$" between February 10th and 19th, and then pop off to New York to see Daniel Radcliffe a week later.

IWU opens for 2011 with the Greek tragedy "The Trojan Women," directed by Tom Quinn. Euripides' play deals with the aftermath of war and its terrible effect on the women of Troy. The last time I saw it, it was set in 1950s Eastern Europe and the ladies looked like they'd fit on "Mad Men." We'll see if director Quinn decides to go with the classical Greek look or updates this eternally timely play. Six performances only, from February 15 to 20.

David Auburn's "Proof," "one of the most lauded plays of the decade," comes to Heartland Theatre on February 17th, running till March 6th. "Proof" is a puzzler of a play, about Catherine, a young woman trying to find her footing after the death of her father, who just happened to be a mathematical genius. He was also mentally ill, however, and this causes Catherine to wonder just which of his genes she's inherited. Does she have his prowess with math? And if she does, does that mean she'll lose her mind like he did? And what about that final proof he may or may not have completed before he died? Audiences have loved "Proof" since it first opened with Mary Louise Parker as Catherine on Broadway, so you are forewarned to get your tickets now to Heartland's production, directed by Cyndee Brown, with Gwen DeVeer as Catherine.

Tickets to the Illinois Shakespeare Festival's summer 2011 season are now on sale! Click here for more information on "Romeo and Juliet," "The Winter's Tale" and "The Complete Works of William Shakespeare (Abridged)."

I told you a few days ago that Community Players has Agatha Christie's "And Then There Were None" on its roster for the fall. In the meantime, if you need an Agatha Christie fix, you might want to try "The Mousetrap," that perennial favorite, at Eureka College. Eureka's production, directed by EC Theatre Professor Marty Lynch, runs from February 22-27 at Pritchard Theatre.

After spending some time in the 40s, Community Players moves to the 1950s with the Howard Teichmann/George S. Kaufman play "The Solid Gold Cadillac," involving a feisty shareholder who takes on the big boys at a billion-dollar corporation. The film version was a very popular vehicle for Judy Holliday in 1956. Community Players' take on "The Solid Gold Cadillac" opens with a preview performance on February 24, with regular performances from the 25th through March 12th. Click on the link in the first line of this paragraph for cast and ticket information.

"Romeo and Juliet," another in the Opus Arte series of filmed performances from Shakespeare's Globe Theatre, comes to The Art Theater in Champaign on February 26th. You can see the whole Performing Art schedule here.

So let's hope the snow melts soon and we can safely make it to all this good stuff.
Posted by JulieK at 3:46 PM