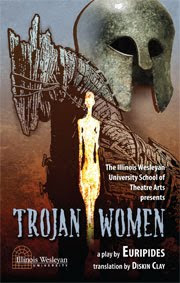 It's easy to understand why Euripides' "Trojan Woman" keeps being revived and retooled, some 2400 years after it first hit the stage in Athens. Over the centuries, there have always been wars. And in those wars, women and children -- AKA "collateral damage" -- have always been among the hardest hit.

Euripides didn't give his "Trojan Women" much of a plot. Instead, he let his female characters voice their lamentations and suffering from beginning to end. No down time here. All fury, grief and pain. He focused on three specific women and their stories -- Cassandra, the prophetess no one believes, crazed and undone; Andromache, wife of slain Trojan hero Hector; and Helen, the beautiful cypher at the center of the conflict -- with Hecuba, the Queen of Troy, and a chorus of women watching as their city burns and they are divvied up and given away as spoils of war.

Thomas Quinn directs "Trojan Women" for Illinois Wesleyan's McPherson Theatre, serving up a vivid, theatrical production with striking stage pictures. Hallie Zieselman's scenic design opens up a stark playing space that looks like bare stone and ash with a little hanging moss for atmosphere, and her aggressive lighting design splashes color and shadow across the stage, adding dramatic ebb and flow. Bridget Galvin's costumes, all ruddy browns and grays for the mourning women, with Helen glowing in white and gold, create the right mood, while Antonio Gracias's portentous sound design adds yet another layer of drama.

Among the players, Allyson Moravec and her maternal Hecuba stand out, with good commitment from Britta Whittenberg, Marlee Turim and Brooke Trantor as Andromache, Kassandra and Helen, respectively. Second-grader Dalton Spalding is sweet and heart-breaking as Hecuba's grandson, Andromache's son, the smallest victim of all the violence of the Trojan War.

This isn't a pleasant play, and it may require a bit of background reading on the Trojan War and its characters to really understand who's saying what about whom. But even if you don't really know your Achaeans from your Dardanoi, the basic idea that these women have suffered terribly will come across loud and clear.