The Crazy Carousel of "Strangers on a Train" 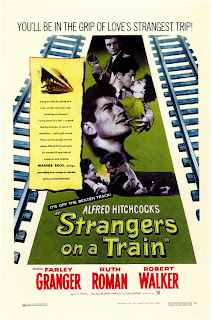 The Normal Theater is offering two Alfred Hitchcock movies in a row, with "Strangers on a Train" tomorrow and Friday at 7 pm, and "North By Northwest" Saturday and Sunday.

They're both crackling suspense thrillers with some similarities -- handsome leading man caught up in web of lies and intrigue that is mostly not his fault, dark humor all over the place, murderous intent from diabolical [also handsome] supporting players, damsels in distress -- but the feel is really quite different.

"Strangers on a Train" is based on a Patricia Highsmith novel, and although there are significant differences between the book and the movie, Highsmith's twisted tone remains. She liked to write about psychopaths, and Bruno*, the stranger on the train who blithely suggests murder, is one of her best. The plot is that basic murder "criss cross" -- since Bruno and handsome, successful Guy each have a roadblock on the road to happiness, Bruno proposes that he kill Guy's vulgar estranged wife, who refuses to divorce him, and in return, Guy will knock off Bruno's father so that he can get his hands on the old man's money. In Bruno's plan, each will have an alibi for the murder he has a motive for, and no motive for the murder he actually committed.

Guy, winningly played by Farley Granger, who makes the character very attractive as well as somewhat morally ambiguous, thinks it's all a bad joke. Bruno, given a delicious brand of crazy by Robert Walker, is quite serious, so serious that he kills Guy's wife off right away as a show of good faith. And then he demands that Guy return the favor and take care of Bruno's father. When Guy demurs, Bruno ups the ante, threatening to plant evidence to make the police think Guy killed his own wife.

It's to Hitchcock's credit that this whole thing seems to move at the speed of light, even though Bruno keeps turning the screws on Guy at a torturous pace. The movie also contains some of Hitchcock's most famous scenes, like the tennis match where the camera is on the spectators and their heads flipping from side to side and the climactic tilting, out-of-control carousel scene, where everybody converges as the plot elements collide.

As these two play their dangerous games, who will end up on the wrong side of the carousel? I'll give you a hint -- Highsmith's book offers a different answer to that question than Hitchcock's movie, so if you don't like the ending in one, I suggest trying the other, too.

Whatever you do, don't miss "Strangers on a Train" on screen Thursday or Friday. On its face, it looks like a simple black-and-white murder movie from the 50s. But there's really no black and white here, just endless shades of gray, as Guy and his romantic woes are clearly shady, and Bruno is so darn charming, even though he's also a psychopath. Robert Walker's best performance on film turns Bruno into something bigger, scarier, and a lot more "normal" than your everyday murderer.

"Strangers on a Train" plays at the Normal Theater at 7 pm on Thursday the 24th and Friday the 25th.

*In the book, his name is Charles Anthony Bruno, but Bruno Anthony in the movie.
Posted by JulieK at 1:09 PM