When I blogged about the State High School Drama contest early last week, I said I would be back to give you the inside scoop as the weekend unfolded. Unfortunately, real life in the form of strep throat intruded, and I was unable to make it down to Springfield for Day One of the competition. That means I missed 9 of the 12 state-eligible plays. So I debated whether I should comment at all, having missed 3/4 of the action.

The good news is that I did see the winner, Melanie Marnich's "These Shining Lives," as presented by a cast from Burbank's Reavis High School, under the direction of Erika Banick and Tom Witting. And even without seeing most of their competitors, I can tell why they won. 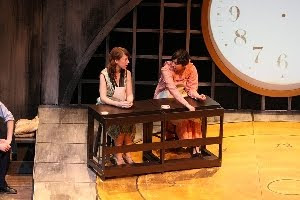 "These Shining Lives" (pictured above, in an image from VIP Photography) is based on a true, terrible story, about young women, sometimes called "Radium Girls," who entered the workforce in the 1920s, eagerly taking jobs painting numbers on watches with glow-in-the-dark, radium-based paint. They were taught to lick the end of their tiny paintbrushes to make a nice, neat point, sticking deadly radium in their mouths with each lick, repeating that action hundreds of times a day as they painted those watches. Marnich's play deals with the Illinois chapter of the story, where Catherine Donahue and her friends toil for the Radium Dial Company in Ottawa, Illinois. Because this is a true story, Reavis took the opportunity to use real newspaper footage, real pictures, real people in the images they projected on a watch-shaped screen center stage, which made Catherine's horrifying decline from vibrant young woman to stooped-over crone that much more emotional.

Victoria Vega was committed and sure as Catherine, with good support from Kassy DeGrado, Katie Keane and Martha Toporkiewicz as her friends at the factory, and Jonathan Morsovillo, Matt Swiec and Derek Whitehouse as the men in their work and private lives. Directors Banick and Witting also deserve credit for smart, fluid staging and keeping an eye on all the details.

Reavis's set, including that watch dial, looked good and worked perfectly, framing the action nicely on a ramped platform that held the tables where the women worked, with a smaller round area for their odious boss and another spot for Catherine's home. Very nicely done, Reavis!

The IHSA judges who voted "These Shining Lives" into first place also handed out All-State Cast honors to Vega, DeGrado and Keane.

Reavis came in second at their sectional to defending champion Oak Lawn Community and their production of "Anatomy of Gray," by Jim Leonard, Jr., directed by Billy Denton, Theresa Wantiez and Marcus Wargin. At state, the order was flipped, with Reavis first and Oak Lawn second overall. Actors Emily Harris and Jacqueline McNaughton took places in the All-State Cast for Oak Lawn.

Another fun bit of trivia -- the two newest plays finished first and second, with 2010's "These Shining Lives" leading the way over 2005's "Anatomy of Gray." Not sure what that means (obviously, schools have had good luck with material all the way back to "Hamlet") but I am happy to see newer works so well represented.

To see the complete results and the entire list of All-State honors, visit the IHSA website here. And you can see images from all the contest plays and order your own copies at the VIP site here.

Congratulations to everyone who participated. I have to admit, I love seeing high school students get this kind of experience building characters and interpreting drama written for the stage. I'm guessing some of them have never seen a professional production of a full-length play. As opposed to, you know, movies and reality TV shows. I hope they'll notice that "How I Learned to Drive" or "Crimes of the Heart" or "Seven Guitars" is being produced somewhere near them, and they'll have fond memories of their high school experience with those plays as they see the full production unfold in front of them.
Posted by JulieK at 10:22 AM