"Two Gentlemen" with a Little Gershwin on the Side 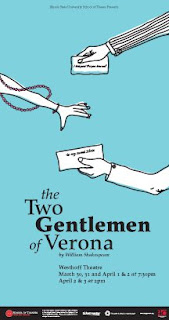 A nice Gershwin tune can elevate just about any material. Even "The Two Gentlemen of Verona," the early Shakespeare play about a faithless, changeable man (named Proteus -- he's protean, get it?) and the woman who loves him, anyway.

"The Two Gentlemen of Verona" is always tricky to pull off, because, let's face it, Proteus is really a jerk. He says he's incredibly in love with Julia, he sends her love notes, the two exchange rings as a sign of their love and devotion, and he pitches a fit when his father says he has to leave town (and Julia) for awhile. But then, as soon as he hits Milan, where his BFF Valentine is hanging out, Proteus spies a girl named Silvia, the object of Valentine's affections. Silvia's dad wants her to marry a different guy named Thurio (as opposed to Valentine), but that's really just a bump on the road, because, after all, Valentine is Proteus's best friend and he was very clear in telling Proteus that he was totally hot for this girl. So what does Proteus do? He decides he can't live without Silvia, betrays Valentine's scheme to get the girl out of town and away from Thurio and her dad's matchmaking plan, and then betrays Julia, too, by trying to give Silvia the very ring Julia gave him. Ouch!

For ISU's Westhoff Theatre, director Emily Gill tries to frame this story like an old musical comedy of the Gershwin variety by interjecting snippets of fizzy, wonderful songs like "S'Wonderful" and "I Got Rhythm" before the show and during scene changes, as well as putting her actors in wardrobe from the first decades of the 20th Century. The Gershwin is lovely, no doubt about it, and the fact that the extra cast members twirl rolling racks around in time to the music gives those scene changes a certain energy and charm.

The idea seems to be that people always acted goofy and silly in those old musicals, so Proteus and his fickle behavior are just part of that same lighter-than-air, nobody-expects-it-to-make-sense school of theater. That works to a point, even if I still think Proteus is a lying snake and both his friend Valentine and his ex Julia ought to dump him and hook up with each other. (Sorry, Silvia. Julia has more moxie, what with that whole dressing-up-like-a-boy thing.)

Jeff Rubin does his best to make Proteus cute and funny, while Zack Powell, so recently seen as J. Pierrepont Finch in "How to Succeed in Business Without Really Trying," is dashing and fun as Valentine. Both of the love interests -- Cady Leinicke as Julia and Becky Miller as Silvia -- look pretty and add energy, as well.

As usual with "The Two Gentlemen of Verona," the dog (supposedly a disreputable mutt, but a beautiful and very well-behaved Golden Retriever named Seamus for ISU) steals every scene he's in. As Launce, the servant with the dog, Tony Pellegrino has the tough job of not losing focus to his canine companion while attempting to tell very creaky and sad jokes, and he tries his best. There's no competing with that dog, though. The dog will win every time.

Adam Spencer's set design, wherein a Victrola, a few trunks and those rolling racks stand in for an attic, a train station and an archway in the park, and Tommy Nolan's luminous lighting design are also clever and attractive.

THE TWO GENTLEMEN OF VERONA
By William Shakespeare

Running time: 2:35, including one 15-minute intermission