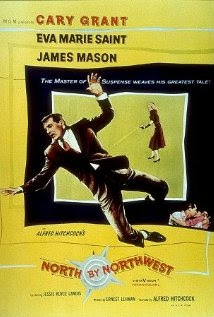 If screenwriter Ernest Lehman and director Alfred Hitchcock did not intend to refer to "Hamlet" with the title of "North by Northwest" -- and most accounts have contended that they did not -- they lucked into a great title and a nice reference to a play about play-acting, playing games and playing the fool, all of which our hero, one Roger O. Thornhill (initials: ROT) does during "North by Northwest."

So, yes, when the wind is southerly, Thornhill knows a hawk from a handsaw from a Hitchcock cameo*. But when he's north-northwest, he's mad mad mad. In a good way. He also drinks too much, is a bit of a heel with the ladies, and seems to have a hard time behaving in general.

Roger Thornhill is one of Cary Grant's most attractive and seductive roles, and that is saying quite a bit. He's at his most handsome here, with his sardonic, mischievous edge firmly in place. Plus he keeps getting into scrapes and mussing up his clothes and his general appearance, which only makes him that much more beautiful. I can honestly say, even if you turn off the sound and ignore the crazy mistaken identity/spies-and-magic-microfilm plot, Cary Grant as Roger Thornhill is worth the price of admission.

These days, Jon Hamm and "Mad Men" are clearly going for the Cary Grant look from "North by Northwest." (Doesn't that falling man in the poster look familiar? Roger Thornhill, the rotter, was even an ad exec in "N by NW.") And it's even more fun to see the original, the prototype, the standard by which all dark, handsome guys in skinny ties and skinny suits will be judged.

Not that the movie doesn't have its joys above and beyond Grant's star turn. If Alfred Hitchcock was pretty darn good at casting protagonists you want to hang around with for an hour or two, he was also an expert with cool blondes with double-dealing agendas (such as Eva Marie Saint in this one) and an absolute master at creating villains. Here it's James Mason as a smooth customer with Continental charm and questionable taste in henchmen. The chief henchman is, of course, Martin Landau of "Mission: Impossible" fame, all sadistic sneers and forbidding eyebrows.

The plot of "North by Northwest" doesn't really make any more sense than the directions in the title. And there are those classic scenes everybody knows about (Thornhill dive-bombed by a crop duster, a bird's-eye view of our hero at the UN, everybody scuttling up and down Mount Rushmore) that mean you may be watching for those and forgetting the rest. But if you do, you'll miss the absolute mastery Alfred Hitchcock brought to this sort of plot, where everybody is pretending to be or mistaken for something he's not, where fate and chance mean more than any plans, where the anti-American villain lives in what looks like a Frank Lloyd Wright house on top of a national monument, where there are so many tongues tucked securely inside cheeks that it's tough to tell the double entendres from the straight talk. If there were any straight talk.

I absolutely love the hijinks built into this movie, in case you hadn't already guessed. There's just something about the cheeky insouciance in "North by Northwest" that will make you want to take train trips, to check your statuary for hidden microfilm, to get matchbooks printed with your initials on them, to order a martini, to watch every movie Cary Grant ever made so you can compare and contrast for general hotness and drollery.

I suggest you start on that mission by watching "North by Northwest" tonight or tomorrow night at 7 pm at the Normal Theater.

*In "North by Northwest," Hitchcock makes his cameo catching a bus as the opening credits end.
Posted by JulieK at 4:34 PM