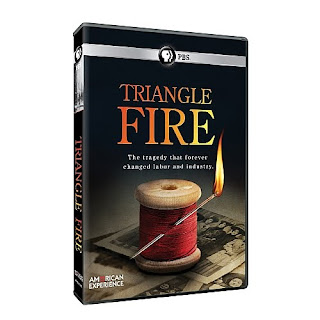 As the governor of Wisconsin tries to break the back of unions in his state, we are also witnessing the 100th anniversary of the Triangle Shirtwaist fire, one of the events that spurred on the modern union movement.

On March 25, 1911, a fire began in a pile of scraps under a work table on the eighth floor of the Triangle Shirtwaist Factory. There have been different theories as to what caused the fire -- a dropped cigarette or match, possibly a spark from an overheated sewing machine -- but fires in clothing factories were nothing new.

The eighth floor of this factory, located near New York City's Washington Square, was crowded with workers, mostly female, mostly immigrants, some of them only 15 or 16 years old, toiling in what were pretty awful conditions under the best of circumstances. And these were not the best of circumstances. There was no fire alarms or sprinklers. Flames made one stairwell impassable, while the doors on the other side were locked, supposedly to keep the workers from stealing anything. And when the fire trucks did arrive, their ladders and hoses were much too short to reach the eighth floor.

Trapped inside, workers tried to jump out the windows, off the roof and into the elevator shaft to escape being burned alive. As word of the fire spread, people gathered outside, watching in horror as these young girls jumped to their death. In the end, 146 women and men perished in one of the worst industrial accidents in U.S. history. The owners of the factory were subsequently tried and acquitted, but the American public got a good, hard look at the results of runaway capitalism, at what exactly should be allowed when it comes to workplace safety and child labor, and just how we ought to be treating those tired, poor, huddled masses we invite to our shores. It's easy to pretend that the have-nots don't exist or don't affect you and yours, until they are literally dropping from the sky.

So, as the 100th anniversary of the Triangle Shirtwaist fire dawns, PBS and HBO are both offering documentaries. PBS's American Experience take on the tragedy offered the employees' own words, taken from court transcripts and interviews to newspapers in the wake of the tragedy, and also looked at the union movement and how that informed the fire. "Triangle Fire" was broadcast a week or so ago in most places, but they are also streaming the program on their website here and offering the DVD for sale here. The cover of the DVD is pictured above.

"Triangle: Remembering the Fire," HBO's documentary, has a different focus, using interviews with descendants of the people who were there. Futon Critic notes that Sheila Nevins, president of HBO Documentary Films and the film's executive producer, is the great-niece of Celia Gitlin, a 17-year-old Russian immigrant who perished in the fire. "Triangle: Remembering the Fire" starts March 21st on HBO.

Both the PBS and HBO websites linked above have lots of other useful information and links to set the scene and learn more about the Triangle Shirtwaist fire.

I love history, but this particular moment is a tough one to take in. The pictures are difficult to look at, the names and ages of the dead are horrifying to read, and the idea of young lives lost so needlessly is impossible to digest. But we need to remember. Because God forbid we should be doomed to repeat it.
Posted by JulieK at 1:37 PM