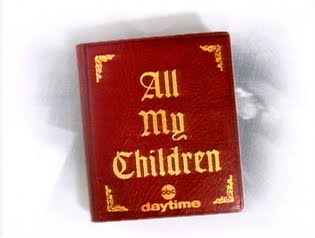 "All My Children" was the popular soap among the junior high crowd in the early 70s, at least at my school. We would see it all summer and on sick days and holidays, and then chat about Phil and Tara and Nick and Ann on the bus every day. I've lost track of the goings-on in Pine Valley quite a few times, especially after things got a bit tortured there in the 90s (or whenever Jenny blew up on her jet-ski), but I managed to come back often enough to generally know who was married to whom and what was happening.

The funny thing is, right from the start, I hated Erica Kane. Not "love to hate," just "yeah, why is this character eating the show?" I did like her first husband, Jeff, and the actor who played him. (That would Charles Frank.) He dumped Erica quickly enough and matched up with a too-nice nurse played by Susan Blanchard, Frank's real-life wife. So Jeff and Mary got married and they were the ones who brought Tad (later to be Tad the Cad and one of the show's major players when Michael Knight took over the role) onto the show. I've always missed Jeff and resented Erica for taking all the focus with her.

So, yeah, "All My Children" has not been the story of the posh Tylers and the stalwart Martins for some time, as The Kane Women and the Chandlers and Cortlandts took over. I admit, I loved Brooke and Tom and even Palmer and Daisy, with all the crazy Gothic goings-on at Cortlandt Manor. And even as I drifted in and out over the years, I still felt a certain happiness in knowing that Pine Valley would always be there, somebody would be serving up Grandma Kate's cookies in the Martin kitchen, somebody's separated-at-birth twin would be arriving, somebody's child-they-never-knew-they-had would knock at the door, somebody presumed dead would throw back the sheet in the morgue and stand up, and somebody else would be vying for the hand of Erica Kane. (Yeah, I even got used to her over the years.)

When ABC and its horribly incompetent head of daytime, one Brian Frons, announced that they were canceling "All My Children" earlier this year, I wasn't surprised, although I was sad. You just can't knock off a show that I've been watching on and off since 1970 and expect no pangs, no trauma, no blaming and kvetching and anger. Those of us who grew up on "All My Children" feel, as Jezebel contributor Margaret Hartmann put it, feel a bit like your parents just sold the house you grew up in. "Even if you haven't lived there in years, there's a part of you that felt like it would always be there, and it's sad to know it's gone," writes Hartmann.

The worst part is that the final episode wasn't really that great. Perhaps to leave alive the possibility of transferring the soap to the internet by a company called Prospect Park, creator Agnes Nixon and her staff decided to go with a cliff-hanger. Or two cliff-hangers. There's an emotional party and some proper toasts and goodbyes, as well as the character of JR Chandler, drunk as a skunk, hiding in a secret passageway with a gun. Boom/gunshot. And fade to black. Who did he shoot? Who knows? I guess we'll have to wait till 2012 to see if there's a continuation of this story. If negotiations with Prospect Park go well. If enough actors and writers go with the show to the net. If it's any good once it gets there. If it gets there at all. If, if, if.

In the meantime, we bid a fond farewell to Pine Valley, and a what may be a final farewell to Joe and Ruth, Jeff and Tad and Jake, Jenny and Greg, Angie and Jesse, Phoebe, Ann and Linc, That Odious Nick Davis, Mealy-Mouth Mary Kennicott, Adam and Stuart, Brooke, Tom, Mark, Benny, Tara and Phil, Billy Clyde Tuggle, Kitty and Kelly, Myrtle Fargate, Langley Wallingford, Grandma Kate, Mona and Charles, Kendall and Zach, Bianca, Marissa, JR, Marian, Liza, Colby, Jackson, Donna and Estelle, Ellen, Devon, Palmer, Daisy, Opal, Nina and Cliff, Trevor, Natalie and Janet, Hayley and Mateo, Noah and Julia, Maria, Edmund, Dmitri, Leo, Gillian the princess, Jeremy the mysterious Frenchman, Laurel, Vanessa, Charlie, Skye, Will, Derek and Livia, Hillary, Emily Ann, An Li, Scott, Brian, Ross, lovely Simone with her awesome hair, crazy Dr. Heyward... And Harold the dog. You were all the bomb. I think you deserved a better sign-off, with at least a tribute to Ruth Warrick and some of the other central characters from the early years, but I guess you take what you get when the suits at ABC decide to pull the plug.

I'll just sit here remembering the glory days when Bobby Martin went upstairs to look for his skis and never came down. Wouldn't it be great if the net "All My Kids" started when Bobby comes down those stairs, now in his 60s, toting his skis, looking around and asking, "What happened while I was gone?"