What You Wish For? Make It Guster and a Meat Cup. At Ravinia. (By Scott Johnson.)

(Once again, I have a guest blogger to write about a concert. Once again, that concert is Guster, this time at the Ravinia Festival outside Chicago on September 3, 2011. Take it away, Scott Johnson!) 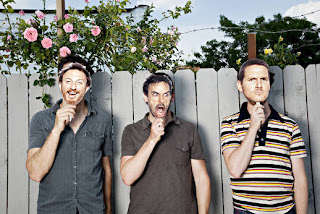 It's been slightly over a year since our return to the concert scene, and while it has nothing to do with Central Illinois arts, I am glad to file another review of Guster in concert for the historical record.

Last night's foray took us back to the Ravinia Festival in Highland Park, where most of a lifetime ago we attended a concert or two but are now having a hard time remembering exactly who we saw (why isn't there a complete list online?). The North Shore venue is still gorgeous, of course, with a variety of new buildings I'm sure weren't there 35 years ago, and the lawn seating still looked like an appealing option except for the stormy weather that loomed to the west. This time, we were in the pavilion, baby – yep, age has its privileges, and the center-aisle box seats with their wide-bottomed chairs suited us just fine.

As at our previous Guster experience, the outdoor setting provided a breezy, relaxed atmosphere for the Boston-based band. Grinding to the end of an eleven-month tour supporting their sixth album, Easy Wonderful, the group showed no signs of fatigue and kept the audience standing, swaying, and singing through an energetic 21-song set, played without intermission. Six of the songs came from the new album, which I have mixed feelings about, so I was pleasantly surprised the band led off with "What You Wish For," the upbeat lead-off cut from their 1999 breakout album, Lost and Gone Forever, featuring Ryan Miller and Adam Gardner singing counterpoint to perfect effect.

Easy Wonderful is the band's most successful album – peaking at No. 22 on Billboard's U.S. chart and No. 2 on the alt rock chart – and judging from the audience their hard work has paid off with legions of new college-age fans, easily detected because they didn't know the words to the old stuff. But I've never really warmed up to the album. To me, a fan for only one year but with some serious iPod playing time invested in Guster, several of the songs – and I'm talking to you right now, "Do You Love Me" – are over-the-top sunny and lacking either the humorous or angsty edge that I really enjoy. Then, too, many of the songs seem to lack the crafty guitar hooks that captured me in the first place. As I suspected, however, in concert none of this really matters. The atmosphere sells the songs. When Guster rolled out "This is How it Feels to Have a Broken Heart," a disco revival that I banished from my iPod a long time ago, I cringed. But perhaps the joke has been on me all along: Miller finished the song with a huge glitter-ball covering his head, wailing away on the harmonica tucked inside.

For longtime fans, and there were plenty in attendance, the band hit many high spots: "Demons," "Happier," "Careful," "Satellite," "Barrel of a Gun," "Airport Song," "Amsterdam" (which they skipped the last last time) and a personal favorite, "Center of Attention." Although Guster long ago gave up the bongo-only percussion concept, Brian Rosenworcel still gives a great show of bare-handed drumming on several songs. Meanwhile Miller, Gardner, and new band member Luke Reynolds trade instruments on practically every number, rotating between lead, rhythm, bass, and keyboards, with the occasional ukulele, banjo, and keytar thrown in for good measure.

As the action slowed for a second and Miller broke into a story, we were treated to one of Guster's famous one-offs, perhaps titled "The Meat Cup is Formin' on the Foreman," about Miller's recent experience with a salami and a George Foreman grill.

Sadly, outdoor concerts in the middle of residential neighborhoods mean early encores, and by 10:30 the band was forced to conclude, offering an ear-splitting rendition of Whitesnake's "Here I Go Again." Taking a turn on vocals were Andrew McMahon of Jack's Mannequin (the opening act), the gravel-throated Rosenworcel, and – rather unexpectedly – comedian Will Forte of Saturday Night Live, dressed in Guster regalia. Don't worry, David Coverdale, your job is safe. 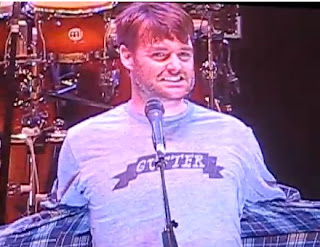