Secrets, Lies and "The Children's Hour" at IWU 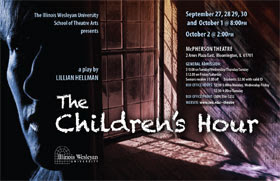 Although Lillian Hellman wrote her play, "The Children's Hour," in 1934, its overriding issue of the destructive power of rumor and innuendo may seem better suited to the Red Scare period in the 1950s, when whispers and lies about who might be a Commie ruined many a career.

In "The Children's Hour," it's the word of a malicious, spoiled child that undermines the adults, destroying the careers -- and personal lives -- of teachers Karen Wright and Martha Dobie. The two have been friends since they were 17, planning carefully all those years to open a school for girls. Their dream has been realized when the play opens, but there are problems. Martha's vain, flighty aunt is ensconced as a teacher, even though she is clearly not suited for it, and one student, Mary Tilford, continues to cause trouble. She's late, she lies, she uses bullying and blackmail with the other girls to get what she wants, and she really, really doesn't like the way Karen and Martha try to control her behavior.

Unfortunately, Mary also has a rich grandmother who wields a lot of power and influence when it comes to the school.

After a clash of wills with her teachers that doesn't go her way, Mary runs away. When her grandmother says she has to go back to the school, Mary concocts a story about illicit kisses and "funny noises" coming from Karen's room late at night, building a big lie about lesbian love out of some ill-chosen words fellow pupils overheard coming from the silly aunt. Grandma buys the story and starts dialing the parents and guardians of other students, getting everybody yanked from the school without raising a sweat.

Martha's and Karen's dream of a school is in ruins, and suspicion clouds them every way they turn. Even Karen's stalwart boyfriend, Dr. Joe Cardin, begins to crack. It's like a snowball of lies rolling downhill, picking up speed and smashing everything as it goes.

Interestingly, Hellman based her play on a real story, where a young girl spread exactly that sort of rumor about two teachers in Scotland in the early 19th century. They sued and won, but the damage couldn't be undone.

So is this play about the power of lies? About the danger in witch-hunts? A warning about sociopathic children? A plea for tolerance when it comes to sexuality? Or just Lillian Hellman's attempt to write a crackerjack of a play, full of conflict and drama?

For Illinois Wesleyan's MacPherson Theatre, director Thomas Quinn has dressed his "Children's Hour" to look like the 50s, perhaps to make the witch-hunt connection more clear. He's also directed his actors to go at the material at a very speedy clip in the early going, giving it a period feel, and then to slow it down a bit after intermission. That makes the play feel snappy and sharp and in-period at the out-set, and more surreal as we near the harrowing conclusion. Billowing fog (called "theatrical haze" in the program) also adds to the murky, unbalanced feel in the second half (although I think there was a bit too much smoke, as several of us were worried there was an actual fire backstage for awhile).

Quinn's cast is also sharp and on point, with Christine Polich very pale and very pretty as Karen, Michael Holding giving good Dr. Joe the right moral fiber, Abigail Root very sneaky indeed as bad, bad Mary, Roz Prickel showing the layers in misguided Mrs. Tilford, and Chantericka Tucker, Angela Jos and Sammi Grant playing just young and immature enough to make their roles as young teens work. Elaina Henderson shows a lot of strength and power as Martha, but she also seems a bit too high-strung right from the beginning, telegraphing what's to come, while Kirsten Anderson's Aunt Lily is certainly flaky and theatrical, befitting the low-rent actress Lily is supposed to be, even as she looks too young and pretty for someone who's supposed to have been around a while.

Scenic Designer Aaron O'Neill has created a warm and cozy drawing room that can turn bare and cold when it needs to, while Caiti Frantzis's costumes set the proper 50s tone and define character as well. (Hint: Look who gets feminine full skirts and who has slim pencil skirts. Discuss.) Krystal Martinez's lighting design also adds to the stage pictures effectively, especially in the closing image, when there are deep shadows cast across Karen's silent, still form.

"The Children's Hour" is an old-fashioned sort of show, where good and evil are clearly drawn, where a small comment early on neatly turns the plot later on, where everybody will be speechifying sooner or later. But that doesn't mean it isn't also a good show, illustrating how words become drama in the hands of someone like Lillian Hellman.

THE CHILDREN's HOUR
By Lillian Hellman

Running time: 2:35, including one 15-minute intermission.