All kinds of things are happening around here that I just found out about. 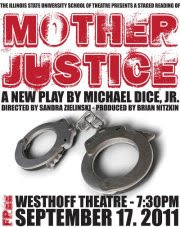 Tomorrow, September 17th, playwright Michael Dice, Jr. and producer Brian Nitzkin, both alumni of ISU's School of Theatre, will workshop their new play, "Mother Justice," at Westhoff Theatre. "Mother Justice" tells the story of Doreen Quinn Giuliano, who began her own undercover investigation, turning her life upside-down, in an attempt to free her son after what she was sure was a wrongful conviction for murder. The playwrights apparently used a Vanity Fair article on Giuliano's "sting" as a starting point; you can read that article here. The performance is scheduled to begin at 7:30 pm, with a talkback immediately after. Sandi Zielinski, a professor from the ISU School of Theatre, directs a cast of ISU acting students. 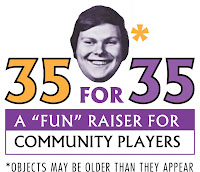 Yes, you read that right. That's a FUN raiser, not a fund-raiser. Well, funds are involved, too. Community Players has issued this statement: "For 35 years Bruce Parrish has spent his spare time to Community Players. To acknowledge his anniversary, the theater has started a $35 for 35 'Fun' Raiser to provide needed repairs to the building. Items needed replacing or repairing include shop equipment, furnaces, sump pump drain, loading dock area, and ventilation for the prop shop and box office." Their goal is 1000 donations, and you can chip in by sending a check to Community Players, P.O. Box 1706, Bloomington, IL 61702-1706, or using a credit card at this link. 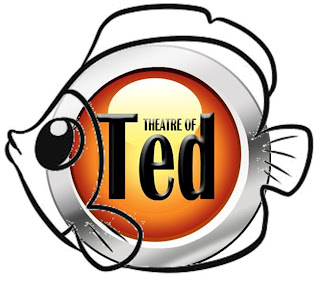 I have no idea how to describe the Theatre of Ted. Outrageous, maybe? Odd? They've been around for about 20 years, always "daring to suck" in their endeavors on the ISU campus. If you want to know what to expect, this is probably the best place to look. Scooby Doo, Star Trek, Living Canvas, nudity, sophomoric humor, brilliance, possibly poo-flinging monkeys... And you wonder why I don't know how to describe this? It appears that their newest show, "20,000 Leagues Under the Ted," has something to do with pirates or ships or maybe just bathtubs. You can see the preview video if you click on the link under the title up there. And then you can also check out the other Ted videos on youtube, of which there seem to be a lot. "20,000 Leagues Under the Ted" takes place in Centennial West 301 on Saturday, September 17th, at midnight. 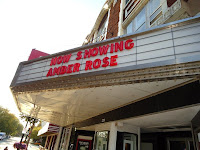 Champaign-Urbana filmmaker Mike Trippiedi has announced that his film, "Amber Rose," about a young girl who runs into trouble when she tries to contend with a new neighbor and her mom's new boyfriend, will be one of the entries in Springfield's Route 66 Film Festival. You can read my piece on "Amber Rose" here, watch the film's trailer here, or read an article about the Route 66 Film Festival here. This Festival takes place at the Hoogland Center for the Arts, 420 S. Sixth Street, in Springfield, with an opening party tonight and screenings all day Saturday and Sunday. The full festival schedule is available here.
Posted by JulieK at 12:43 PM